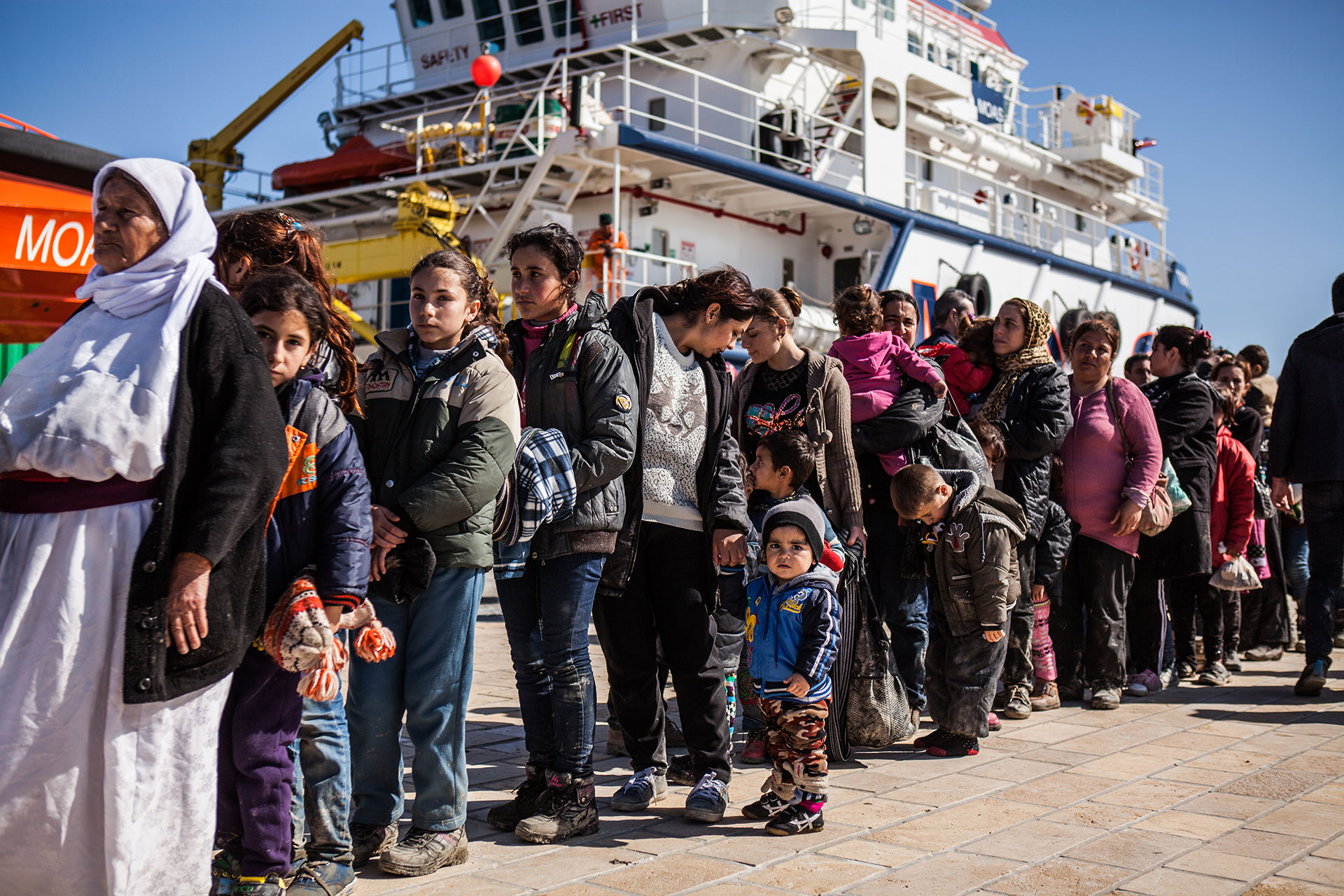 Since last June, when the new Italian government started its mandate and the political debate on migration further fuelled national egoism within EU Member States, the situation both at sea and on land deteriorated. At sea, an unprecedented number of migrants lost their lives in a bid to reach Europe. As stated by IOM, in June 2017 more than 23,000 sea arrivals were recorded in Italy, while this year in June around 3,000 disembarked after the perilous crossing. This is the lowest figure since 2014 and a huge relief for those fearing an “invasion”, which actually doesn’t exist according to official data and reliable statistics.

But, what’s the human price of this achievement?

It’s very high, both in terms of casualties and general atmosphere. Casualties at sea peaked during June 2018, when an unprecedented 564 migrants were believed to have perished in the Mediterranean, while another 200 might have drowned in July. It is enough to consider that in June 2017 -in spite of a much higher number of arrivals- 529 people died because of the dangers of political inaction. Besides this horrific loss of lives at sea, too often rescued people are left stranded at sea and trapped in a diplomatic ping-pong. Humanitarian vessels were strongly discouraged to continue their SAR missions and generally prevented from docking in Italian ports. On June 28th, Malta eventually accepted a group of exhausted migrants upon agreement with other EU Member States to relocate them as soon as possible, while Spain showed empathy and political responsibility by welcoming the highest number of people (rescued both on the Central and Western Mediterranean routes).

As for the general atmosphere, rampant populism and criminalization against NGOs are poisoning our society. We have become acquainted with images or footages showing the rush against time to save people at sea and the indifference to the death of innocent individuals. Confronted with the evidence of drownings and the enormity of pain generated by our indifference, we prefer to invent fake news to deny tragic events rather than finding a rational and long-term solution. 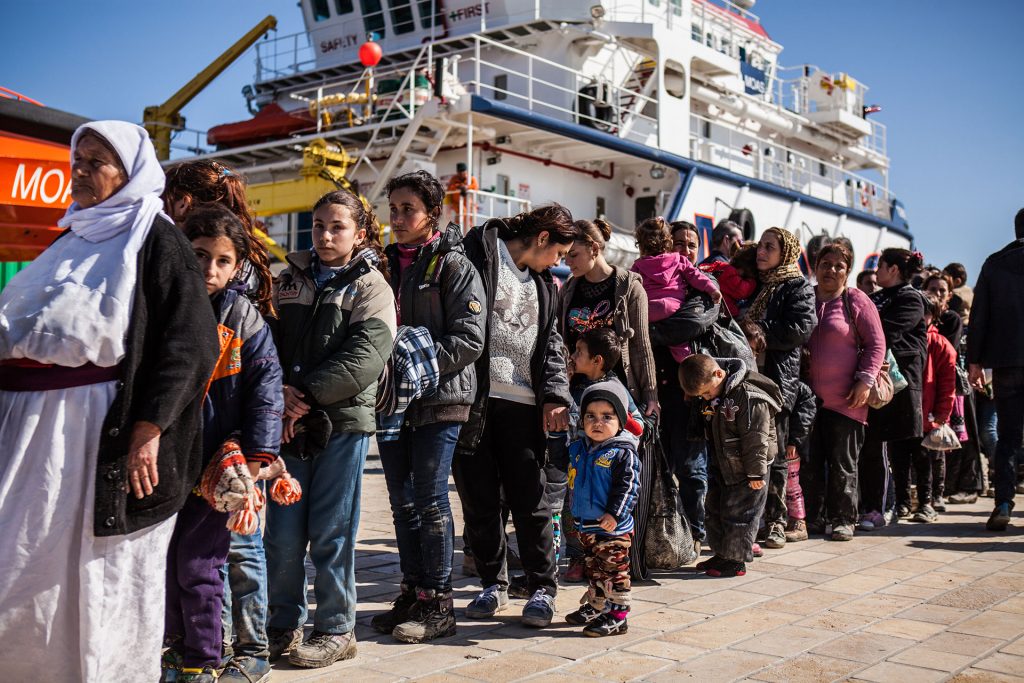 From MOAS Archive.
Women, children and men wait in a line after disembarkation

I strongly believe in the European Union, and even though I see its limits and weak points, I am determined to contribute to rebuild it from its foundations and inspiring principles, instead of dismissing such a valuable project. Nonetheless, I am concerned about the message we are giving to future generations, when it comes to humanity and the precious heritage of human rights developed throughout human history. The so-called “migration crisis” revealed the inner weakness of our European ideals confronted with the grim reality of desperate people fleeing en masse due to a number of reasons. Europe has only denied responsibility and procrastinated the implementation of effective solutions so far. The main actions undertaken were all focused on border protection and externalization. Political and diplomatic summits mainly assessed migration flows from our perspective in order to explore viable ways to protect ourselves. Coastal countries, such as Italy and Greece, were left alone to face uncontrolled waves of arrivals by sea, and Turkey was given a total of €6 billion for 2016-2019 to host Syrian refugees and stop crossings along the Aegean route. Additionally, on July 25th, the European Commission approved a complementary measure to support education for Syrian children and allocated another €400 million specifically for this purpose.

The latest “concept papers” -published by the European Commission to facilitate negotiations and find a shared agreement to handle arrivals and relocations- address the creation of controlled centres to process asylum/protection claims, as well as the achievement of regional disembarkation agreements possibly involving third countries. Unfortunately, no third country has declared its willingness to set such centres yet, and all proposals are voluntary. Again, Member States will be free to act based on their national interest. Today, 30th July 2018, IOM and UNHCR are meeting in Geneva and are expected to further negotiate proposals the European Union, to find a shared solution and implement urgent actions to overcome the current deadlock.

What worries me most is the core message we are giving to future generations: migration is a matter of money and funds to be allocated, not a matter of fundamental human rights and protections of the most vulnerable individuals, in compliance with International Law. The European Commission suggested it could pay up to 6,000€ for each “relocated migrant” and “cover the transfer costs of €500 per person given to the country of disembarkation”.

I know well that humanitarian missions and activities entail costs, and funds need to be allocated to support the process of welcoming, relocating and integrating migrants and refugees. But, I am wondering if the risk to reduce human beings to an amount of money isn’t too high in light of the current scenario. I ask myself if we are not sending the wrong message to our children and telling them that everything and everyone can be given a price. We instead should be teaching them that human rights and people are priceless. Shouldn’t we better reflect on offering a dignified and respectful future to those who survived incredible journeys, rather than reducing the debate on migration to a rate of compensation for those who welcome them?

In the end, what’s the price of human life?