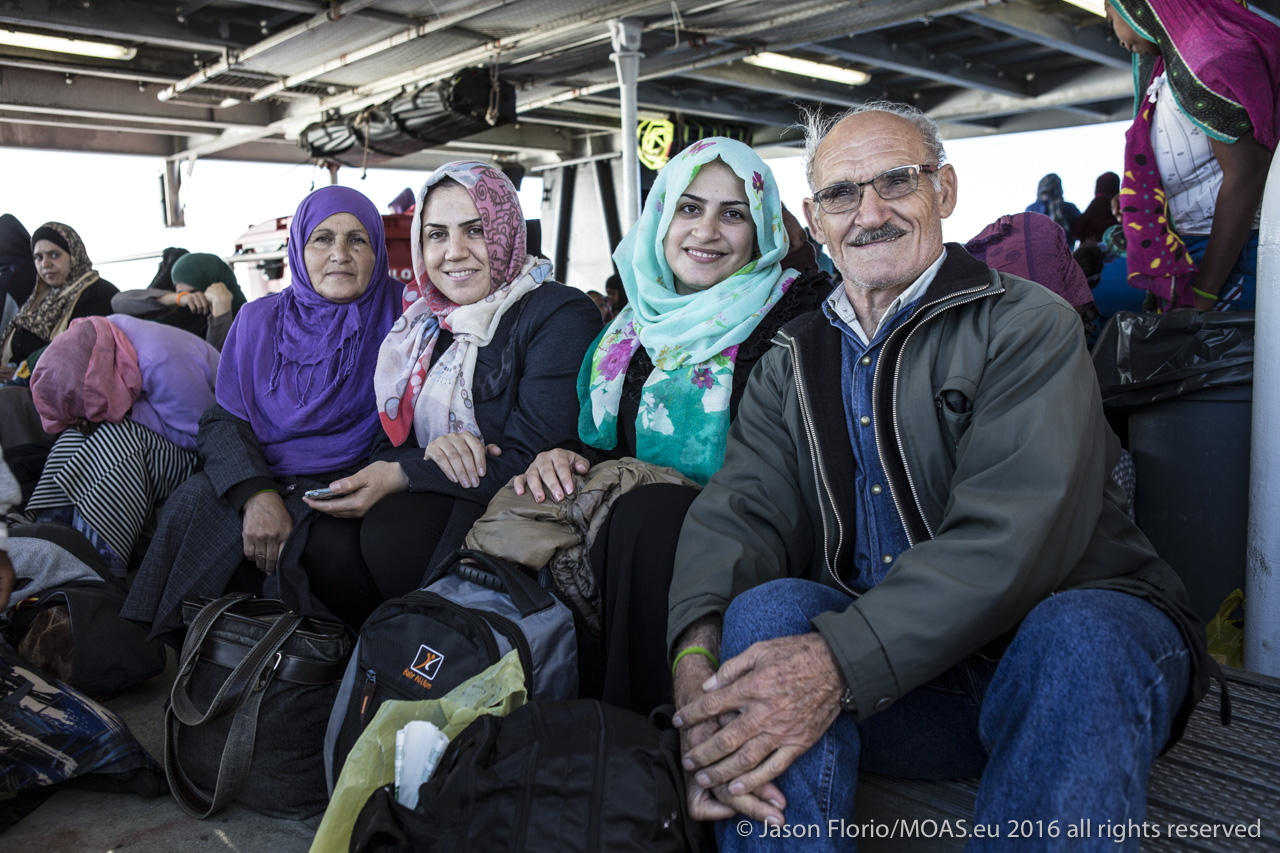 28 Aug 2017 What’s criminal in wishing to live? Story of a Syrian family in search of safety

In November 2016, the MOAS crew operating in the Central Mediterranean rescued a Syrian family made up of four people: Hamed, the father (70); Sheriffa, the mother (61) and their two daughters aged 37 and 27.

They came from Damascus and their homesickness was like a wound that had never healed. They left around 10 weeks before being rescued, after a journey for which they paid 1000€. It was their second attempt to cross the sea and reach Europe.

The first attempt occurred one month earlier after paying 2000€, but they were stopped and arrested by the Libyan Coast Guard. The experience was so traumatic that a Syrian friend travelling with his son on the first boat decided to go back to Syria.

Better to die at home, he must have thought.

Ruwaida, the older, is an electrical engineer who had worked in Venezuela for 8 years, where she learned Spanish. That’s why she hoped to go to Spain, even if her family wanted to join her brother in Munich.

Elin, the younger, had recently graduated, but it was impossible to find a job due to the civil war in the country.

Life had become unbearable: bombings, violence, and shootings only worsened a disastrous economic situation, as a “one-month wage was enough only to buy food for one week”. Even their elderly father was forced to go back to work to support the family, but without success.

It was time to leave.

So, they took the car, they drove to Beirut and arrived in Tunis by plane to reach Zawiya, Libya, hoping to cross the sea and start a new life far from fear and panic.

Hamed, Sheriffa, Ruwaida and Elin bear witness to what it means to wake up in a country ravaged by war.

War, which seems so distant to us, became their fearful reality and forced them to flee, leaving everything behind: from material commodities bought with their savings to the house where they used to feel safe, from their loved ones to their certainties.

Every time I meet people who are no longer young and who are travelling on overcrowded vessels to flee a country that they may never see again, I wonder how it feels to leave in such painful circumstances.

The awareness that you will never see again the places where you have been happy, where you have built your life and family before war came to destroy everything, must be atrocious.

But, I understand that we are ready to face all obstacles in order to seek refuge for our loved ones.

In the end, what’s criminal in wishing to live?

In trying to survive a massacre?

What is offensive if you decide to flee in search of a better future, after having become unable to feed your family?

What is actually offensive is that people are forced to rely on smugglers who profit from their despair, as this Syrian family had to face a lethal journey, despite the protection granted by international law.

If only one person is in danger at sea, MOAS will not stop rescuing them until legal alternatives are in place. For one year we have been steadily working on safe alternatives to stop the deadly crossings as soon as possible and replace them with flights of mercy.

This article was first published on an Italian magazine.