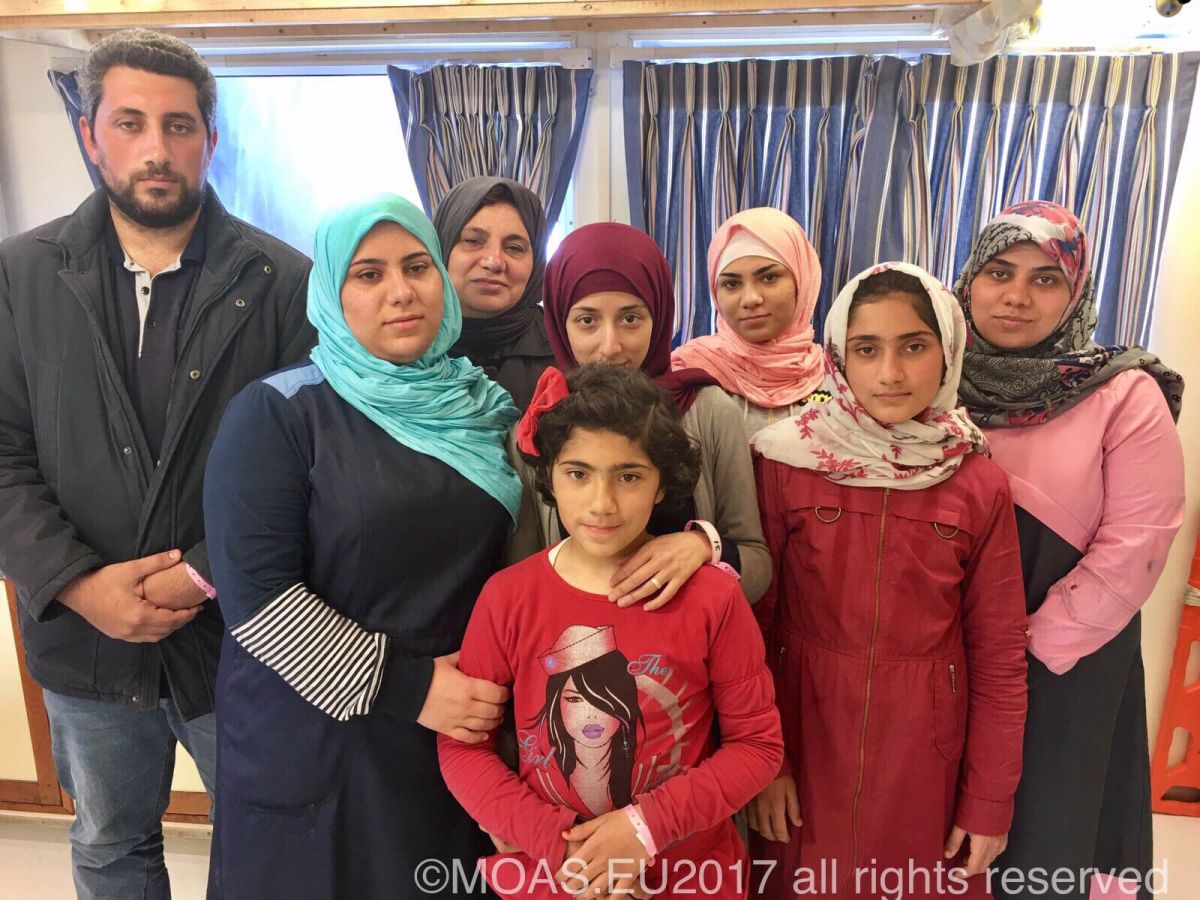 Posted at 14:25h in blog by admin
Reading Time: 3 minutes

Jalal is 29 and comes from Syria. In 2012 he was forced to leave his homeland due to the nefarious consequences of the ongoing civil war.

After fleeing Syria, they reached Sabratha, Libya, where they experienced violence: extortion, lack of drinking water and food, arbitrary detentions by local authorities.

To attempt the crossing they paid 2,500 Libyan dinars, 20,000 Libyan dinars in total. This was the price of their journey of hope, which they could attempt all together at least.

Jalal and his family were rescued by other SAR entities and then welcomed on board the Phoenix on June 18th after formal request from the Italian Coast Guard. After standard medical checks, our crew tried to put them at ease.

So, Jalal, interpreting for all family members, revealed their dramatic story and their strong desire to start a new life as soon as possible was evident. Some relatives are still in Syria, while two brothers are now in Germany.

Germany is where they wish to go not only to reunite the whole family far from war, but also to continue his education and find a good job. In Syria he had studied aeronautic engineering and now his aim is to raise enough money to treat his wife Walaa, suffering from Crohn’s disease. While fleeing Syria access to medical care has posed huge challenges.

As documented by our sister organisation, Xchange, the current situation in Libya is unbearable and, even if it has always been difficult to live there, the revolution in 2011 has dramatically worsened the living conditions.

During a fact-finding mission in Libya, 100 people from Syria were interviewed, while trapped in the country. The only alternative to leave the country was provided by human traffickers. After reaching Libya, you can only leave it by boarding unseaworthy vessels.

During their stay in Libya people are exposed to every kind of abuse and degrading treatment: while walking on the street they can be kidnapped by armed strangers who then torture the victim at their convenience for ransom, their belongings can be stolen or they can be detained with no legal assistance.

Another serious problem concerns medical care and access to medical treatments for those stranded in the country.

It is actually impossible to receive adequate assistance both because many people are illegally detained and the country has a severe lack of medical staff and resources.

This means denying the right to health and those in need of medical treatments often cannot receive them.

Nevertheless, the Universal Declaration of Human Rights (1948) with its Article 25 states as follows: “Everyone has the right to a standard of living adequate for the health and well-being of himself and of his family, including food, clothing, housing and medical care and necessary social services“.

Health, thus, represents a further reason of vulnerability, and it has the highest priority when screening eligible candidates for humanitarian corridors.

As affirmed on different occasions, since August 2016 MOAS together with UNHCR is working on the opening of safe and legal routes in order to provide the most vulnerable people with a valid alternative to the fatal sea crossing.

MOAS firmly believes that nobody should risk his or her life at sea searching for the same peace and safety, which are granted for those who are born in the right part of the world.

Through the stories collected over the past 3 years of SAR missions, we have witnessed too many people dying of hope and shared the pain of too many parents fleeing unsafe regions where their children were denied the right to health care. We cannot stand by and watch anymore.

As in 2013 after the Pope’s appeal against the globalisation of indifference and the shipwreck occurred on October the 3rd, we decided to step in to mitigate the loss of lives at sea, now we are ready for this new challenge of humanity / humanity challenge / challenge for humanity (?): stopping deadly journeys and starting legal ways for the most vulnerable people.

Because Nobody Deserves To Die At Sea.

This article was originally published by an Italian magazine.

Please click here to know more about the Right to Health.