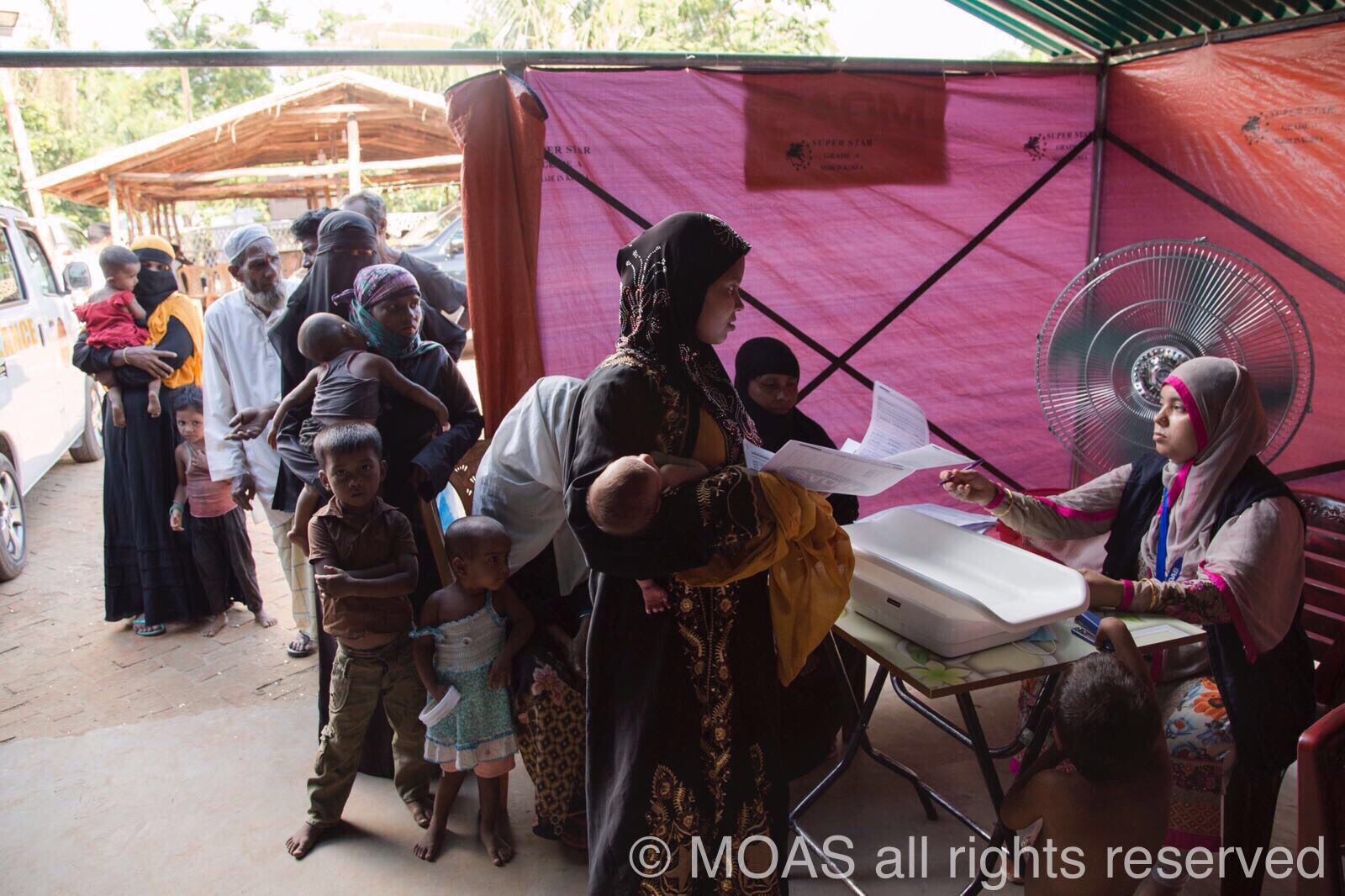 09 May 2018 Rohingya women, a major target of violence both at sea and on land

Three years of MOAS’ missions gave me many chances to better understand the impact of forced migration on children, women and men. Both on land and at sea, I experienced first-hand the consequences of uncontrolled migration flows run by criminal networks profiting from the lack of safe and legal routes to reach safety.

According to UNHCR data, women and girls make up 50% of the world’s refugee, internally displaced and stateless communities, and are victims of gender discrimination and marginalisation, as well as being highly vulnerable. The risk of violence, abuse and sexual slavery is very high for women fleeing conflict, persecution and extreme poverty, especially when they travel alone or without a man.

Among the Rohingya Muslim stateless minority -historically discriminated by the government in Myanmar- they make up to 60% of the entire refugee community in Bangladesh, second only to children who represent the largest percentage.

Since last October MOAS opened two primary health centres, called Aid Stations, in Shamlapur and Unchiprang, in Bangladesh. Through them I have personally met many women who shared their stories and fears for the future, as well as their hope to finally find peace.

After the Pope’s visit in December 2017, a Rohingya woman who had met him received medical care and psychological support from our team, after being raped by an officer of the Burmese army. Rape is considered a weapon of war and – together with endless violence and discrimination against Rohingya people in Northern Rakhine, Myanmar – it forced almost 700,000 people to seek sanctuary in Bangladesh.

Last winter, I met Jhuma (40), a Rohingya woman who escaped to Bangladesh with her eight children after her husband was killed in front of her, and she told me about the violence her family experienced in Myanmar. I also met Jharu, who explained to me the difficulties of living in an overcrowded camp without your husband and looking after her three daughters. Two of them are teenagers while the third is eight years old. She has to increasingly protect them from being raped or kidnapped.

Rohingya stories are marked by unspeakable violence that does not end after leaving. Here, amid chaos and overcrowding, unscrupulous criminals take advantage from the lack of attention or extremely poor families, who struggle to receive adequate food assistance. Women and girls are the first victims of traffickers. They are often targeted during the journey or from inside the camps. Many find themselves kidnapped and held for ransom, facing death if left unpaid. Others are exploited as prostitutes facing horrendous sexual abuse. Some are even sold into marriage or put into bonded labour for rich families in neighboring countries. They once again get trapped in endless violence. 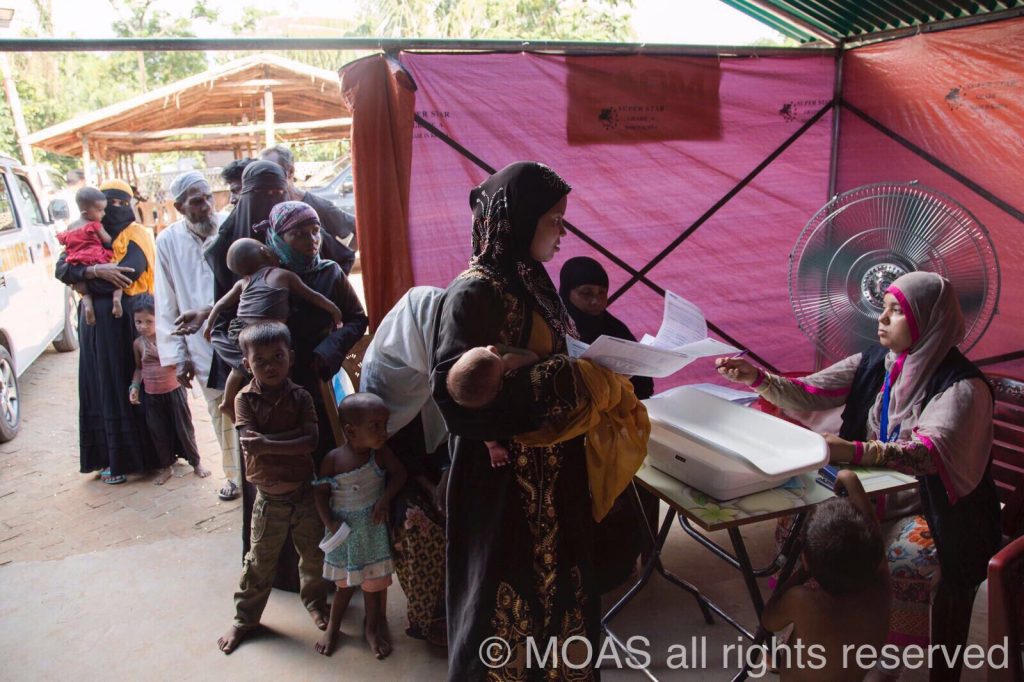 But, we know even less about the risks and dangers out at sea.

According to UNHCR data -as reported by IOM (International Organisation for Migration) in its report “Fatal Journeys, Volume 3, Part 2”-, around 170,000 Rohingya and Bangladeshi people have crossed the Andaman Sea departing from the Bay of Bengal between 2012 and 2015. In 2015, when the Andaman Sea crisis reached its climax, IOM focused on these tragic journeys, officially estimating the fatality rate to be around 1.2%, although it is believed to be much higher.

The UNHCR was the only organisation collecting data on this issue, as highlighted by the above-mentioned IOM report, and according to them “the fatality rate for those journeying on boats through the Andaman Sea from the Bay of Bengal from 2013 to 2015 was double that for refugees and asylum seekers travelling through the Mediterranean Sea during the same time period”.

Rohingya women are passengers on these sea crossings. During and after the sea crossings, the risks for women are not only sexual violence and slavery, but also kidnappings for ransom, and those who don’t pay are condemned to death.

Drawing from the latest news of shipwrecks and the evident lack of reliable data on sea crossings along the Andaman route, MOAS decided to start an observation mission to assess SAR needs in the area both in order to learn more about it and to react,if people are in danger.

How can we protect the most vulnerable people, if we don’t even have reliable data to understand where and how to react?

How can we rescue people in distress, if we don’t even know how many people depart on flimsy vessels?

How can we prevent things from deteriorating, while safeguarding human rights from abuse, if we don’t know the extent of this phenomenon?

It is time to stop acting based on a principle of proximity and take into account the current geopolitical scenario through a global approach to migration.

As proven by almost 9,000 Bangladeshi people arrived on Italian shores in 2017, no place is far enough if you flee war, extreme poverty and persecution. Migration cannot be addressed by raising walls and fences. The first step is thus to learn more about the operational scenario and challenges through reliable and independent data, as well as to coordinate all entities on the ground -from national security officers to humanitarian organisations- in order to build a path of development and peace. For this reason, MOAS is proud to start a one-month independent observation mission, which will run in parallel to our daily work on the ground providing medical assistance to the most vulnerable Rohingya and Bangladeshi communities in Cox’ Bazar.