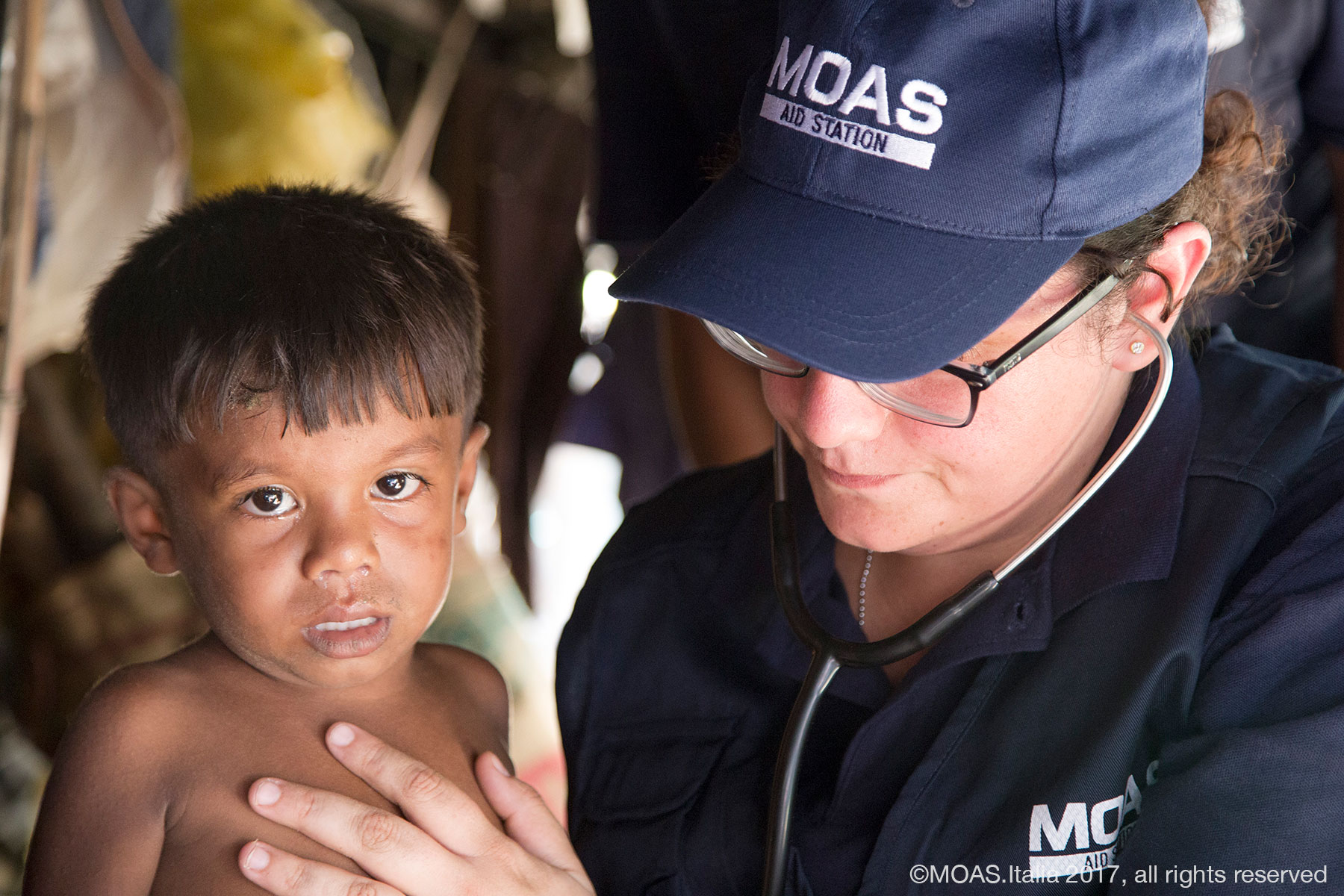 Since late August we have heard worrying news about the Muslim Rohingya community in Myanmar who are forcibly displaced after escalating violence, as highlighted by the United Nations. In light of this and following Pope Francis’ appeal, MOAS decided to reposition its vessel, the Phoenix, from the Mediterranean to Asia. Having been a symbol of hope for those crossing the Mediterranean and Aegean Sea, it is now supporting MOAS Italia’s mission in the field.

But who are the Rohingya people?

The Rohingya people are a Muslim minority mainly settled in Rakhine State, Northern Myanmar, and are victims of major persecution and abuse. It is estimated that 1.1 million Rohingya people are currently living in Myanmar in squalid camps and dire conditions marked by discrimination and endemic poverty. Rohingya have their own language, but they are not officially acknowledged among the 135 ethnic groups who were recognized as citizens by the government in Myanmar in 1982. This has serious consequences on their enjoyment of basic and citizenship-related rights. 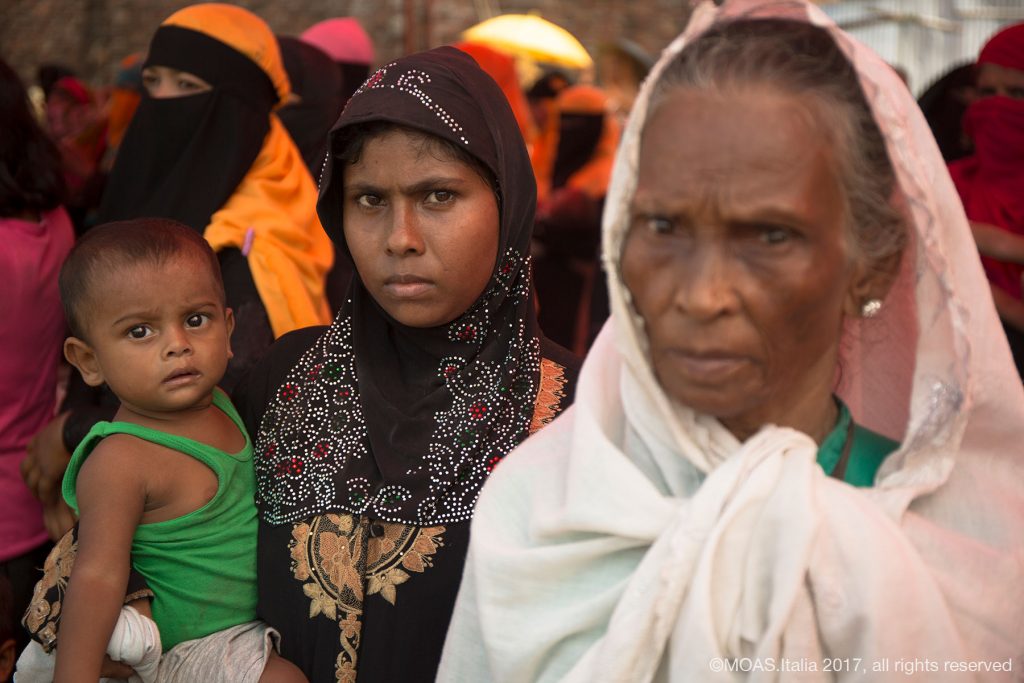 In order to better understand their story, we have to go back in time.

According to some historians and Rohingya groups, their presence in Myanmar dates back to the twelfth century. However, the number of Rohingya people in Myanmar increased more recently under British rule from 1824, when the area was administered as an Indian province, including other territories which later belonged to Bangladesh and India. At that time, a remarkable number of workers arrived in the area currently known as Myanmar. Due to their religion, they were viewed in a hostile way by the native inhabitants of the region; Rohingya people are Muslim, while the majority of people in Myanmar are Buddhist.

Hostilities became evident from 1942, when Japan invaded the region. During the British withdrawal, groups who ‘groups who were perceived as having taken advantage of their rule became a main target. Between 1942 and 1945, when the British came into power again, an estimated 22,000 Rohingya people moved to Bengal to seek sanctuary. After the British rule came to an end and Burma declared independence in 1948, clashes between central government and Rohingya community escalated, peaking during the 70s. At that time, around 200,000 Rohingya crossed the border with Bangladesh, whose government was confronted with an unprecedented humanitarian crisis. Supported by international organisations and the UN, the Bangladeshi government established 13 camps along the border. Following negotiations with the Burmese government some Rohingya returned, mainly after conditions in Bangladeshi refugee camps deteriorated and food rations were reduced. Voluntary returns continued throughout the 90s, but no stability or permanent security has been achieved so far.

Additionally, in 1982 the government passed a law openly denying the Rohingya citizenship and related rights unless they could prove they had settled in the country before 1823, an extremely difficult task. Unable to enjoy citizens’ rights and forced into statelessness, the Rohingya are denied those rights that we take for granted, and which allow us to live a ‘normal’ life. Their freedom of movement is limited, they have no access to secondary education, and they are forbidden from working as public officers. Discrimination and violence, thus, occur in a catastrophic situation of poverty and uncertainty, whose roots can be found in historical, juridical and geographical factors.

In 2015 some cases of ‘ghost boats’ were reported, in which traffickers packed an extremely high number of desperate Rohingya families seeking refuge onto boats before abandoning them out at sea with no water or food. Often none of the neighbouring countries were willing to welcome them, only providing first-aid assistance. Even along this ocean route, so far from the Mediterranean, history repeats itself, with desperate and vulnerable people forced to put their lives in the hands of traffickers who so often abandon them and are only interested in increasing their profits.

The international media has recently covered the Rohingya’s fate once again, as since August 2017 they have been a major target of violence, leading to massive forced displacement across the border with Bangladesh. The United Nations estimate that since August around 515,000 Rohingya have arrived in Bangladesh, namely in the area of Cox’s Bazar, where our team provides emergency medical assistance and food aid.

On October 4th, with MOAS Italia we decided to choose courage over indifference once again, guided by a spirit of mercy and universal brotherhood and rooted in humanitarian principles. We are going to open the first MOAS Aid Station providing 24/h per day medical assistance with a team made up of specialists in antenatal and postnatal care, as well as in preventing malnutrition particularly among children.

We can’t wait to bring aid and hope to those who feel abandoned and to offer vital commodities, together with empathy and relief, to those who have lost everything to be safe.

We will keep hope alive where it is most needed because nobody deserves to die at sea, nor on land. 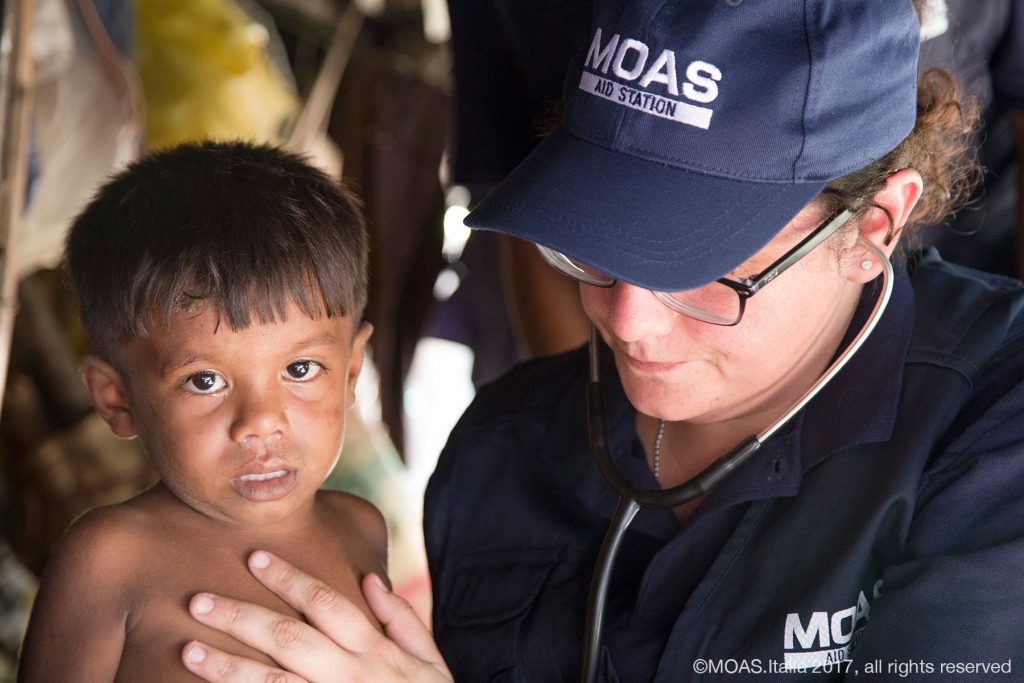 This article was published by HuffPost Italia