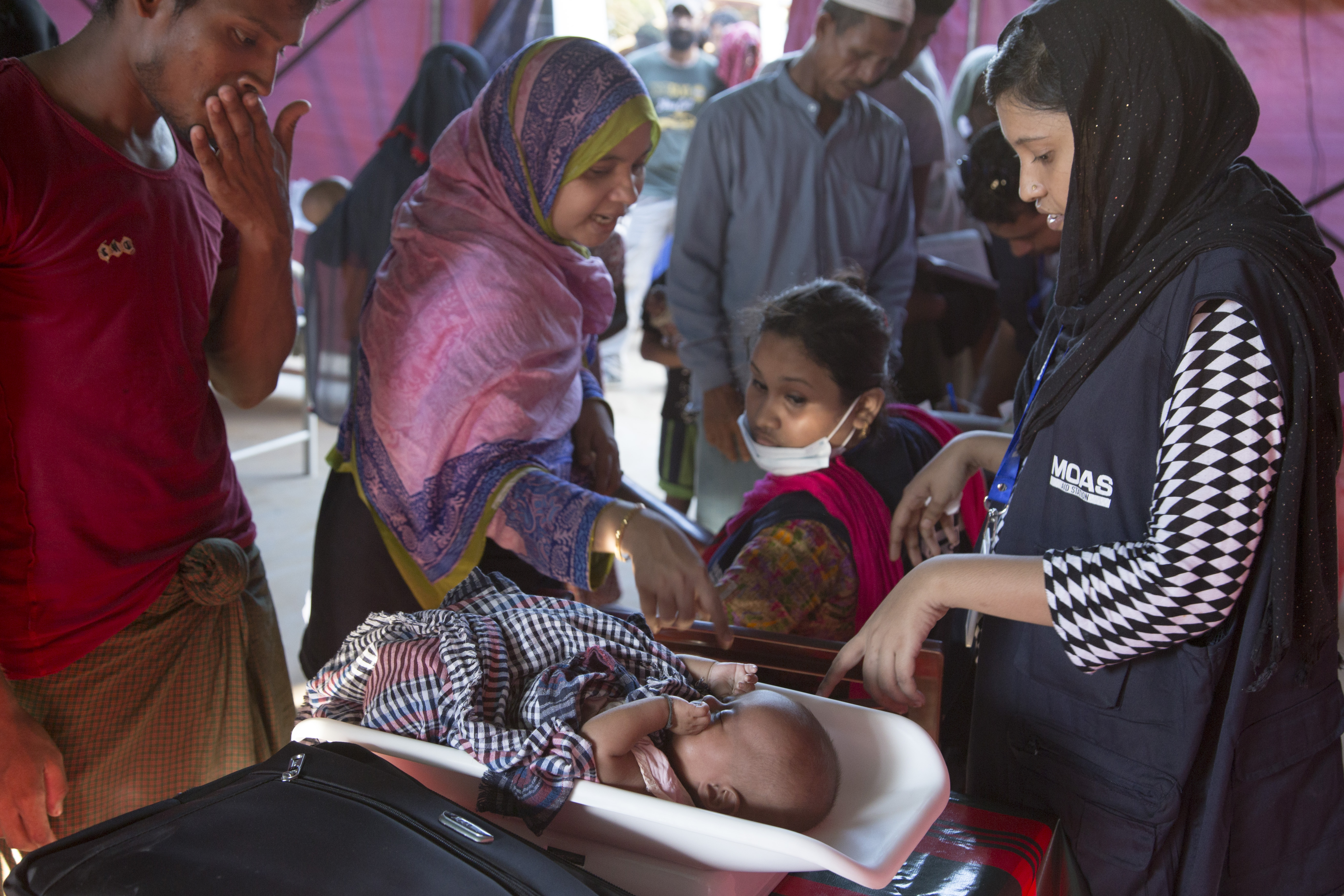 Since violence erupted last August 25th in Myanmar an estimated 647,000 Rohingya people are believed to have crossed the border with Bangladesh, arriving by sea or land or by crossing rivers. Six out of ten are believed to be children, and there is an incredibly high percentage of women, mostly of them pregnant or lactating. Such massive exodus poses enormous challenges to the Bangladeshi government and local communities that are struggling to provide basic commodities due to a lack of resources in a very poor country, which is often ravaged by natural disasters.

The result of clashes, violence and persecution against the Rohingya community in Myanmar, mainly in the Rakhine State, impacts on Bangladesh too and exacerbates the dire conditions of the existing camps, that are unable to host the newly arrived Rohingya people. So, camps are overcrowded, and desperate people settle wherever they can. Makeshift settlements, mostly made of plastic and bamboos, are spreading around the established ones or in new areas at an alarming rate, exposing their traumatized inhabitants to greater dangers by modifying the landscape with no environmental consideration at all. 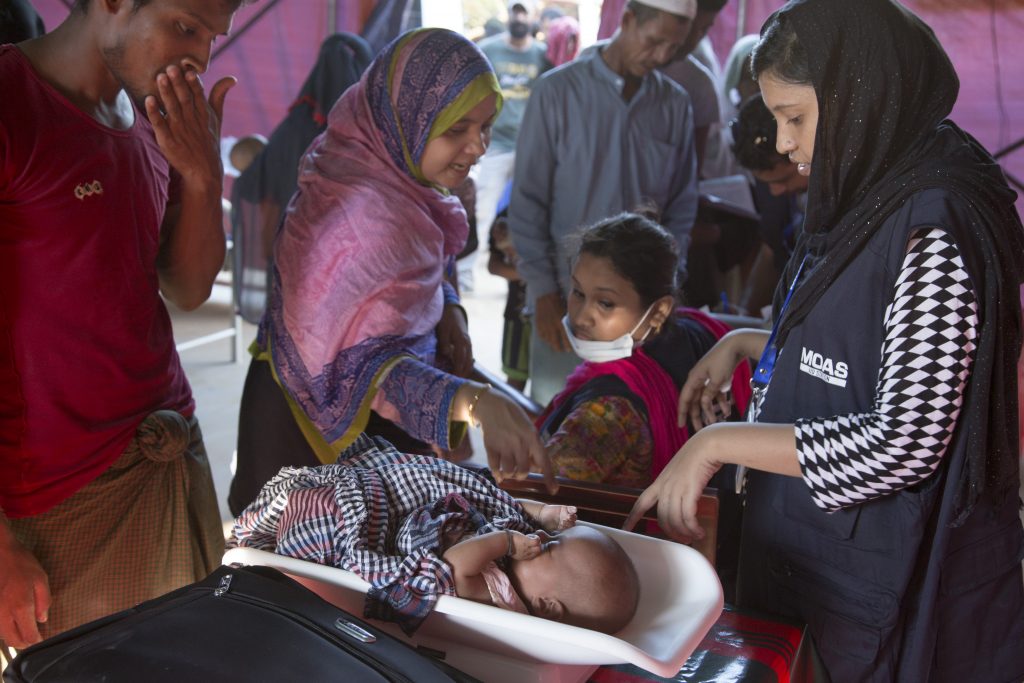 Copyright: MOAS Italia
A woman at our Aid Station in Shamlapur receives assistance from our MOAS medical team

But lack of clean water, sanitation and medical facilities, malnutrition and high risk of waterborne or communicable diseases are not the only dangers threatening this persecuted minority. Chaos and confusion are the main obstacles to a rational registration of newly arrived people and to an efficient management of the camps, increasing the risks of being kidnapped or trafficked. This grim reality is becoming more and more common amid the displaced Rohingya, and different families have reported that their kids have gone missing. Going to play in front of a makeshift house can turn to be fatal, if traffickers are around. Girls are particularly vulnerable and likely to be pushed into forced prostitution or sold as housekeepers for rich families both inside and outside the country. Unaccompanied minors, who traveled alone from Myanmar or lost their family members during the perilous journey, are also targeted by child traffickers who enjoy impunity since it is too difficult to prove them guilty.

After surviving decades of marginalization, discrimination and violence in Myanmar –where women and girls are anyhow victims of sexual assault and exploitation by local authorities- Rohingya people have to attempt desperate journeys smuggled by human traffickers, only to end up stranded in overcrowded camps where their worst nightmares never vanish. Being stateless and displaced in a host country, they have no means to concretely defend their rights. After being denied access to medical care and education system in Myanmar, they struggle to get basic services upon their arrival in Bangladesh, and their endemic poverty is so rooted that they could be at the mercy of traffickers for whatever they may need. Abandoned and with no money, they can only rely on external assistance to feed their families and receive medical care.

Since the very beginning of their exodus, the UN warned about the risks of living in overcrowded camps and stressed the urgent need for a rational management, but few progress has been recorded so far. Beside the above-mentioned dangers, extreme poverty and despair are triggering factors for another grim phenomenon: unable to become economic self-sufficient and pressured by their debts with traffickers who smuggled them into Bangladesh, families are selling their kids and forcing them into bonded labour for small money to survive. Children will thus be out of school and exposed to the dangers of forced labour at a young age.

If we go beyond discrepancies and differences, the core elements of this unfolding crisis are the same as previously highlighted based on my experience at MOAS: when people are too poor or desperate and lack official ways to improve their life, smugglers and traffickers’ business thrives to the detriment of human rights. We have witnessed a dramatic escalation of violence and abuse across the Mediterranean where vulnerable people became targets and victims of human traffickers amid silence and impunity from the international community. We have already explored the awful consequences of entire generations dropping off school and condemned to ignorance together with the appalling reality of forced prostitution.

News and evidence from South-East Asia reinforce our opinion at MOAS: human rights, mercy, solidarity and brotherhood have no borders. Wherever violations occur, we should feel compelled to react as soon as possible before the situation worsens out of control. So, your help is needed to support our medical and humanitarian efforts to relief the plight of a vulnerable and persecuted minority, that is far from our eyes, but close to our hearts.