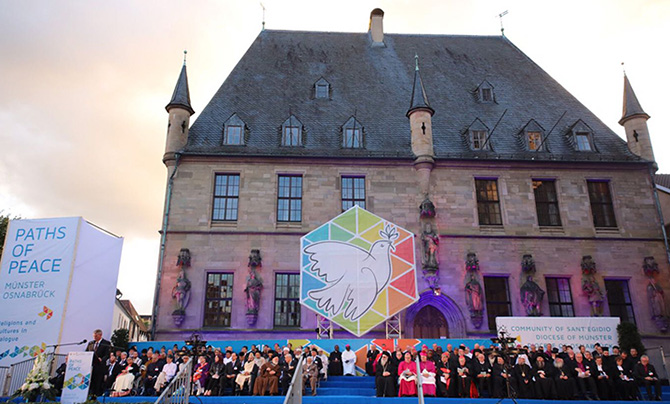 15 Sep 2017 Paths of Peace: the way towards a future of peace and brotherhood

From September 10th to 12th I was invited to attend the event Paths of Peace organised by the Community of Sant’Egidio in the German cities of Münster and Osnabrück. Both cities have had a long tradition as a symbol of peace – particularly of inter-religious dialogue – since 1648, when the Peace of Westphalia was signed there to put an end to the Thirty Years’ War and the European wars of religion by extending people’s liberty of conscience.

With the ultimate goal of re-launching a universal message of peace and brotherhood, the Community of Sant’Egidio organised meetings aimed at discussing this sensitive and urgent topic, with conflicts intolerance and racism escalating at a global level. All meetings gathered representatives of different religious communities, political authorities and organisations committed to building a more welcoming and shared society, as well as defending the rights of the most vulnerable people.

The fight against terrorism necessarily implies a deeper understanding of its triggering factors and a global commitment to create paths of integration for those forced to flee extreme violence or poverty.

I was happy to bear witness to MOAS’ experience, since from the very beginning we have demonstrated the crucial role played by civil society in mitigating the pain of those who are forced to leave their country in search of safety and a better future for themselves and their children.

It was important to make an overview of MOAS’ missions from August 2014 to August 2017 and explain the developments that have occurred in our operational area, and which I have experienced first-hand by myself while on board.

On average between August 2014 and June 2017, the number of people jam-packed on unseaworthy vessels had almost doubled, as well as the cases of multiple departures from Libyan shores, while the quality of wooden boats and dinghies has become so poor that vessels barely reach international waters. Sometimes they sink even before being spotted. These developments have posed enormous challenges to the MOAS crew, as after a race against time at sea they have to provide medical care to our guests aboard.

From a medical point of view, violence has drastically increased, leaving wounds on people’s bodies and souls. More and more, we have seen gunshot wounds as well as severe burns caused by a mix of sea water and poor-quality fuel. These wounds are typical of people rescued at sea from unsafe vessels, and mainly affect women since they usually sit in the bottom of the boats.

However, at present there are too many questions without an answer, and too many doubts about those trapped or brought back to Libyan detention centres. So, since the situation is so sensitive and uncertain, MOAS does not want to become part of a strategy where nobody pays attention to the people who deserve protection, but only focuses on preventing them from arriving on European shores without considering their fate when trapped on the other side of the sea.

This does not mean MOAS will surrender.

We will focus on bringing hope to new areas where it is desperately needed.

On this occasion, I had the opportunity discuss our achievements as well as the challenges faced by MOAS, and explore future developments following our decision to react again to Pope Francis’ appeal to protect our Rohingya brothers and sisters. Rohingya people are a Muslim minority in extreme need of humanitarian assistance. So, we have decided to reposition our vessel, the Phoenix, to the Bay of Bengal to provide assistance and humanitarian aid in the makeshift camps around Cox’s Bazar in Bangladesh. 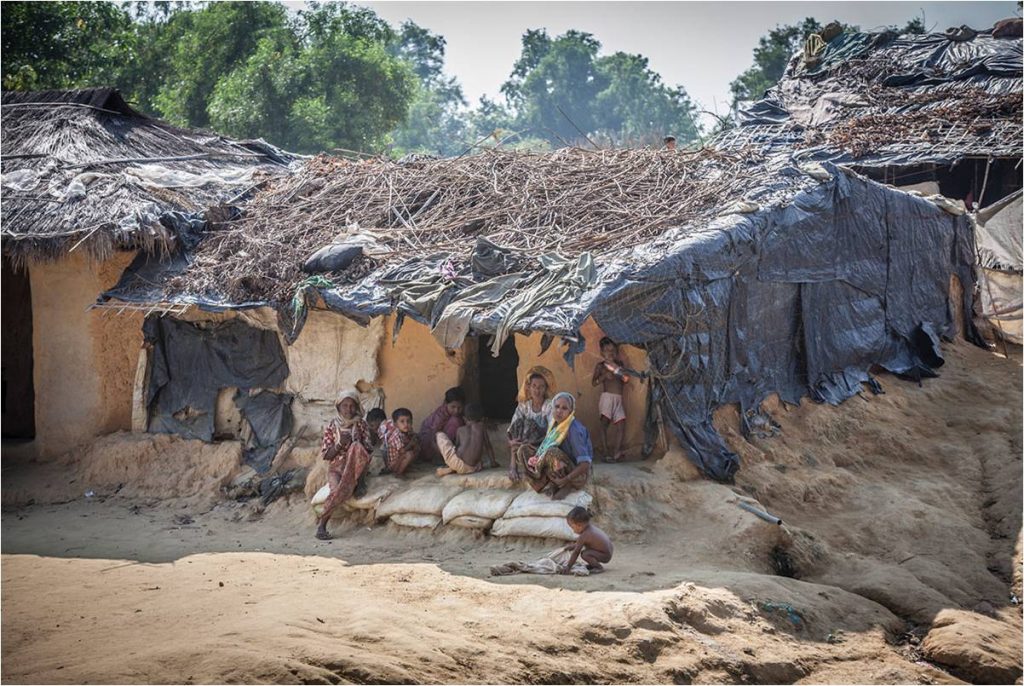 MOAS has been monitoring this area in South-East Asia since last year, and in May 2016 a MOAS sister organisation called XChange issued a report after visiting some Rohingya centres and interviewing people there. So, with our know-how developed in the region and the lessons learned with MOAS, we decided it is time to take action and safeguard a forgotten minority in a remote region.

A life in peace is a mere illusion if fundamental human rights are denied to extremely vulnerable people. In light of this, MOAS has been working for over a year on the opening of safe and legal routes to allow vulnerable people to reach Europe in a safe way, and stop the deadly business of human smugglers as well as uncontrolled migration flows.

Since MOAS’ inception, we have rescued and assisted more than 40,000 children, women and men, and we are determined to save many more.

We will keep hope alive where it is most needed.

Nobody deserves to die at sea, or on land.

Once again, we are committed to being at the forefront of the world’s worst humanitarian crises. We are driven by courage, mercy and universal brotherhood, which prevent us from remaining indifferent to people’s suffering as they escape from unbearable situations.

At the end of the event an appeal of peace was presented. You can read it by clicking here.

“The religions cannot desire anything less than peace, as they pray and serve, ever ready to help those hurt by life and oppressed by history, ever concerned to combat indifference and to promote paths of communion”

From the message of Pope Francis to the international meeting Paths of Peace, September 10th, 2017.