31 Jan 2018 Monsoon alert and vaccination campaigns: how MOAS is mitigating the suffering of Rohingya communities in Bangladesh

More than 520,000 Rohingya children are currently living in unsanitary and overcrowded camps or makeshift settlements across the Cox’s Bazar region, and they are all exposed to the serious threat of the upcoming monsoon and cyclone season. The current fragile scenario in Bangladesh could turn a natural disaster into an environmental and humanitarian catastrophe, whose consequences are hardly predictable. Last October UNICEF launched an appeal to the international community to focus its attention and resources on avoiding the worst consequences in terms of casualties and human health, and all entities on the ground are working in a race against time to adjust to new needs.

At present, food, health and shelter are the main concerns, and we are all aware that heavy rains in low-lying areas may turn into a catastrophe: when massive numbers of persecuted Rohingya refugees arrived, they built most of the shelters on their own to host the largest number of people possible. Now, the influx has slowed down and the monsoon season is coming, so it is time to act in order to prevent huge damage. As far as shelters are concerned, more robust and solid materials are needed. It is also pivotal to advise families on re-positioning their homes, as well as helping with construction, digging drainage channels and evacuating smoke from cooking fires.

Another concern is human trafficking. As highlighted last November, since the outset of the Rohingya exodus into Bangladesh I had warned of the risks linked to living in overcrowded camps for people who have nothing but their hope to survive. Women and children represent almost half of the global refugee population, and the displaced and persecuted Rohingya community is no exception in this respect. 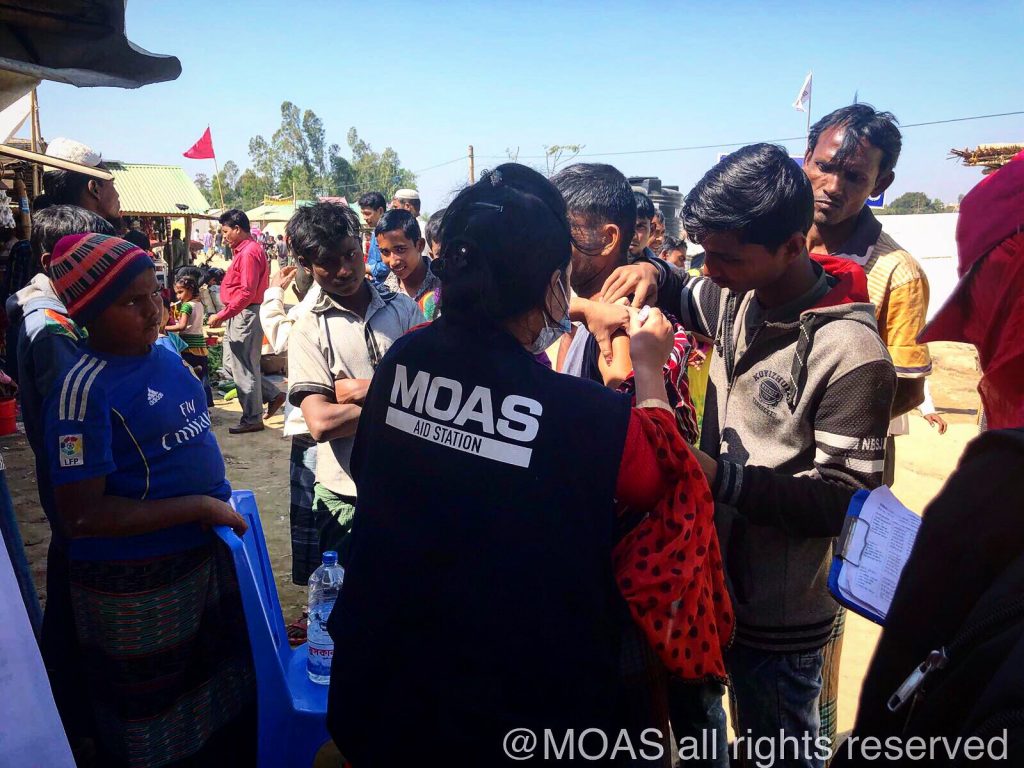 Last May, the severe Cyclonic Storm Mora seriously affected Bangladesh: a first count reported at least six casualties and 136 injured people in the area of Cox’s Bazar and Chittagong, where an estimated 10 million people were living. Additionally, government sources reported more than 50,000 houses destroyed and at least 260,000 people potentially displaced without safe shelter. At that time, Rohingya refugees lost reliable shelters, food, fuel and spaces to cook, and all efforts are now focused on preventing similar scenarios from occurring.

My biggest concern, on behalf of the entire MOAS team, is that once again the most vulnerable people will be the main victims, that those who most deserve attention and protection will pay the highest price because of their weakness. It is fundamental to bear in mind that during the massive influx of Rohingya refugees over the last few months, most of the new shelters were built by cutting trees, because of the lack of available spaces to host this large number of newly-arrived people. This has caused soil degradation, deforestation of some areas and higher risk of landslides, which may be fatal for a large number of people, if we consider the latest figures released by the Inter Sector Coordination Group. The cumulative arrivals are 688,000: in Kutupalong-Balukhali Extension Site alone there are around 585,000 refugees, while 237,000 live in other camps and 79,000 in host communities.

How will we reach everyone in need when transport will be hampered by the weather, and heavy rains will destroy roads and bridges? How will we be able to provide medical assistance where it is most needed in a catastrophic scenario?

MOAS is intensifying meetings and coordination to better manage field activities with other NGOs and entities working to mitigate the potential impact of the next rainy season. Our hope is to reach as many people as possible with high-quality medical care and assistance. Since the opening of our first Aid Station in Shamlapur, we have managed to assist more than 36,000 children, women and men who needed medical treatment and humanitarian care. Moreover, we are glad that MOAS personnel is able to take part in vaccination campaigns under the guidance of the Bangladeshi Ministry of Health and in coordination with WHO to protect people from communicable and water-borne diseases.