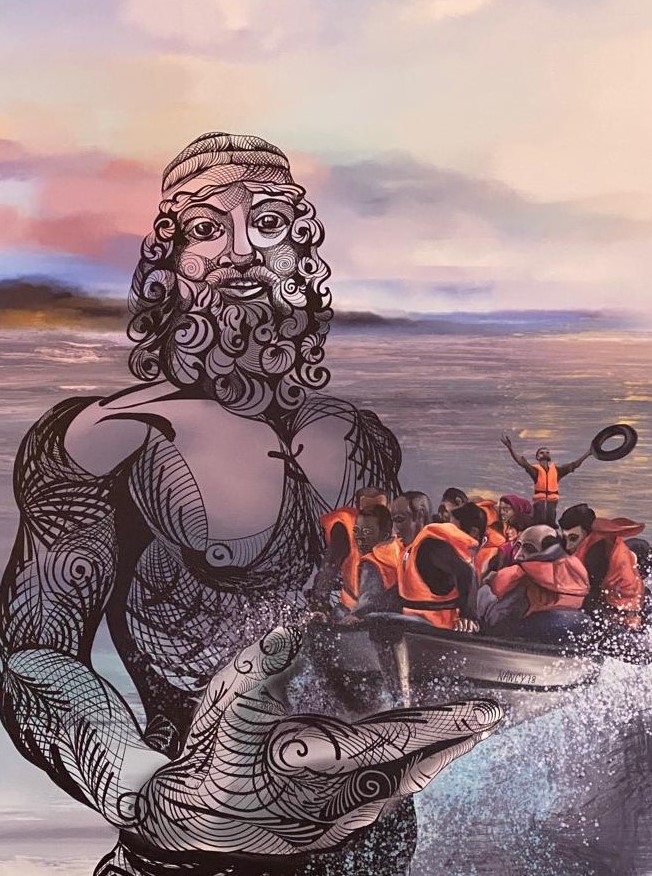 21 Oct 2021 Mimmo Lucano and the trial to solidarity

This illustration is made to commemorate an heroic act of common sense and humanity. As the sun’s dying light glimmers across the sea, a boat of people in bright orange life jackets is miraculously lifted out of danger by the Riace Warrior. Drawn from one of the two Greek bronzes found off the coast of Riace in the 70’s, the statue comes to life. In a whirl of elemental force, the hands of a weaponless warrior are put to use saving lives instead of destruction. With every breath an exchange bridges a gap between life and death in every human being. Our capillaries portage oxygen and nutrients across this molecular divide. Can we conceive of our world in the same way? Mimmo does. His Global Village in Riace is a model to the world of what is possible. He converts intolerance and hostility into tolerance and hospitality. He bridges the impossible divide that has sprung up like noxious weeds in our world, removing what threatens to strangle us all.

The sentence issued on September 30th by the Locri court against the former Mayor of Riace, Mimmo Lucano, shocked and stunned many of us.

After four long years, Lucano was sentenced to 13 years and 2 months of imprisonment for abetting illegal migration and for “irregularities” in managing the asylum seekers. The long list of crimes he is accused of committing are criminal association, false public deed and certificate, aggravated fraud for the achievement of public funds, abuse of office and embezzlement. Lucano was sentenced to double the years of imprisonment that had been requested by the public prosecutor.

In 2017, half of Riace’s population was made up of people coming from 26 different states. Following the recovery of abandoned houses and artisan shops and the reopening of schools, what was a ghost town destined for depopulation like many other small towns in Southern Italy, was becoming a lively centre of hope. In the aftermath of his election in 2004, Mayor Lucano welcomed migrants arriving on the Italian coasts, creating a unique model of inclusiveness and solidarity which included multi-ethnic kindergartens, inclusive medical assistance, and incentives for work in the fields and in the shops.

With the accusations against Lucano, the interruption of government funding and the closure of the Italian SPRAR (Protection System for Refugees and Asylum Seekers), the town of Riace begun to depopulate, and that model of virtuous hospitality which was internationally praised, begun to dissolve without contingency planning.

Waiting for the subsequent judicial steps, it is impossible to deny that the penalty for Lucano for mere administrative errors is disproportionate, as has been stated by numerous jurists who have closely followed the case.

This seems to be part of a generalised criminalisation process that, in recent years, has been reserved for those who save or are in solidarity with migrants. From fishermen and non-governmental organisations that operate monitoring and rescue activities in the central Mediterranean accused of aiding illegal immigration, to local administrators, citizens and voluntary associations who try to offer assistance to those who are in our territory.

A dangerous and inhumane trend has led to the externalisation of the migration issue, there has been an endemic failure to renew search and rescue missions in the Mediterranean and there has been consistent collaboration with the Libyan Coast Guard. Furthermore, racialised hate on social media and in society regarding migration issues, often degenerates into real acts of violence against migrants.

“I spent my life for ideals, against the mafias, I was Mayor, I sided with the most vulnerable, with the refugees who arrived, I imagined myself contributing to the redemption of my land, it was an unforgettable and incredible experience, but today I have to take note that everything ends for me.”

To these sad words, uttered by Mimmo Lucano immediately after his sentence, we must respond by continuing to advocate for models of integration in his image. We must not leave alone all those humanitarian workers who support people in need and who give hope to territories ‘tormented by abandonment and oblivion’ such as Calabria.

We cannot lose hope of creating a better and more supportive world. All of us must continue to act and engage even in the most difficult times, such as these we are living in, when a part of society seeks to criminalise acts of humanity.

As the words of Pope Francis remind us “History tells us of many people who were judged and killed, although they were innocent: judged according to the Word of God, against the Word of God. Jesus was faithful and obeyed the Word of the Father but ended up on the cross. With how much tenderness Jesus said to the disciples on the Road to Emmaus, ‘Oh you foolish and slow of heart.’ Let us ask the Lord to look to the large and to the small follies of our hearts with the same tenderness, to caress us gently and to say to us: ‘Oh you foolish and slow of heart’ and begin to explain things to us” (Homily, Santa Marta, 11 April 2016).