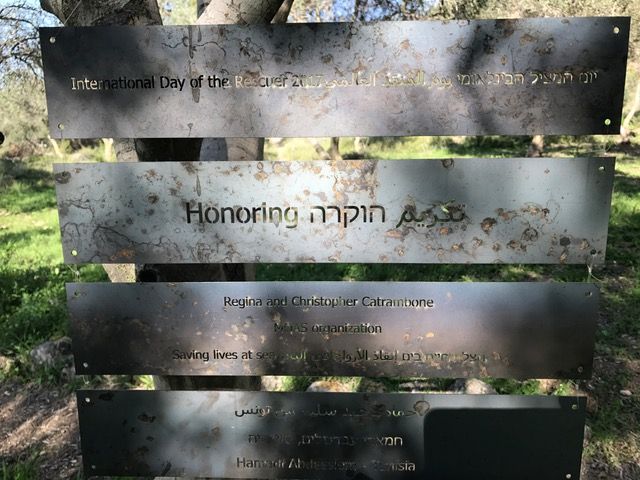 Posted at 15:08h in blog by admin
Reading Time: 3 minutes

There is a small village in Israel where peace and harmony triumph over war and chaos. This place is called Wahat al Salam Neve Shalom and hosts the Garden of the Righteous celebrating those people who have saved lives in various ways and different places. My husband Christopher and I were both invited to the ceremony held on March 8th and to my surprise I found myself surrounded by children playing music and singing songs in such a beautiful garden.

On this occasion I was invited to talk about MOAS’ mission devoted to mitigating the loss of lives at sea which started when Christopher and I decided to welcome Pope Francis’ words. In the summer of 2013 -on his first official visit to Lampedusa- he warned against the “globalization of indifference”. In October a shipwreck took place in front of Lampedusa, killing 368 people. They drowned just in front of the Rabbit Beach, a famous tourist destination.

I was deeply shocked by the images of the bodies lying on the white sand. So my husband Christopher and I decided that we could no longer stand by and watch such a terrible human tragedy. We decided to act, as we both believed that nobody deserves to die at sea.

Indifference is a real danger nowadays, and its etymology explains an attitude of not caring about what surrounds us. Indifference means a lack of concern and sympathy, and is also to a certain degree the driving factor for the creation of MOAS because my family decided to care. We knew that we didn’t have the “solution” to the humanitarian crisis in our hands.

But we also knew we could use our know-how and our experience of assisting people in conflict zones to save human lives at sea.

From our first SAR mission until the last one, the MOAS team has saved more than 33,000 people. We have been an example of courage to the many organizations that now patrol the Mediterranean Sea, following our footsteps. Nevertheless, in 2016 over 5,000 people lost their life during the sea crossing

In light of this, MOAS is actively working to create humanitarian corridors since they would avoid the loss of life at sea and help break smugglers’ deadly networks.

Moreover, they would also help in managing migration flows and improving integration in our shared community.

Physical and emotional distance does not help us to solve the current humanitarian crisis. Walls and razor fences cannot avoid atrocities and pain for those confined inside. They just hide the reality, but don’t lead to any kind of solution. Primo Levi, an Italian writer and Holocaust survivor, said that concentration camps can be created because people remain indifferent to human rights violations. We make history every single day. Our actions and our decision not to act bear consequences for those in danger.

Primo Levi also used to say “the human species — we, in short — had the potential to construct an enormity of pain, and that pain is the only force created from nothing, without cost and without effort. It is enough not to see, not to listen, not to act”.

MOAS was created because our family decided to care, to see, to listen and to act.

We decided to preserve the precious gift of memory and remembrance in order to avoid the same mistakes.

We felt part of history and wanted to play an active role in mitigating the pain of those who flee violence, war and persecution.

In light of this, the village of Wahat al Salam Neve Shalom as well as the commitment to honour the Righteous of our times gives hope that a better world can be built if we all come together and commit ourselves to give our own contribution to relieve the pain of our brothers and sisters.