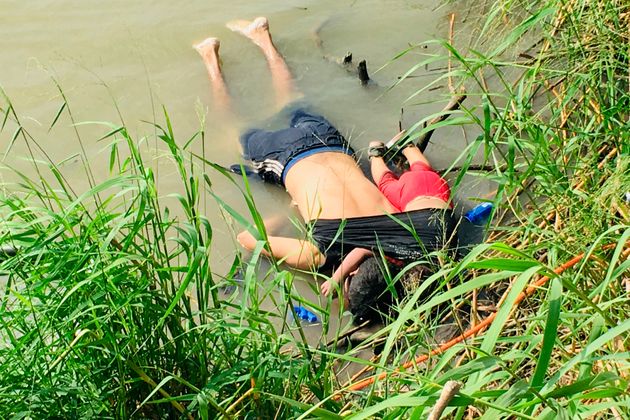 The tragic image of a father and daughter holding each other tightly inside the father’s t-shirt, with the little girl clinging around the young parent’s neck, takes me right back to images of Aegean crossings, where Syrian parents tied children to their bodies so they would not get lost in the water or on the boats.

The hug between parent and child evokes feelings of love, tenderness, sweetness. Unfortunately, the idyllic image is destroyed by the fact that this hug does not occur in a moment of leisure or happiness, but is a desperate embrace in the murky waters of the Rio Grande river, which separates Mexico from the United States.

This image, which was shared around the world, portrays the two bodies face down, immersed in muddy water, and has become a symbol of the tragedy of migrant people fleeing Central American countries for the United States. It is a photograph that will remain in our memory like the one of little Alan Kurdi, which was taken in September 2015.

Oscar Alberto Martínez Ramirez and the little Valeria – whose desperate attempt to cross the river to get into Texas followed the closure of the bridge, intended to block the flow of migrants – today represent the thousands of people trying to escape the criminal activities of violent gangs which every day prey on their neighbours, burn their houses and threaten with death anyone who dares to oppose them.

What or who killed the two? What killed Oscar and Valeria – and with them all the children, women and men who lost their lives trying to arrive elsewhere, fleeing from violence, rape, war, persecution and famine – are the walls that have been built and the ports that have been closed.

What killed them is the indifference and political choices of countries which, forgetting that hospitality is the foundation of our civilization, treat those most in need as an enemy, as a threat to our security.

Walls and barriers, physical or imaginary, kill in the waters of American rivers, on the waves of the Mediterranean and Aegean seas, on the border between Myanmar and Bangladesh, in the Gulf of Aden and around the world.

According to the latest UNHCR report, in 2018 the number of people fleeing war and persecution exceeded 70 million – the highest number recorded by the United Nations in the last 70 years.

What can each of us do to prevent 10, 100, 1000 more children from dying like Valeria or Alan? Today, we are called upon not to lose our humanity and not to betray our moral imperative.

We are called upon to recover the example of Antigone and make it our own. In the tragedy of Sophocles, opposing the edict promulgated by Creon that prohibited her from honouring the death of Polynices with funeral rites, Antigone became the universal symbol of resistance and struggle against every injustice.

The young woman prefers to commit a crime against the state and be condemned to death than to disregard her ideal of good and risk losing her humanity.

Today, our humanity dies every time a human being drowns in the waters of our seas and our rivers: according to an estimate by IOM, 682 people died and 356 were confirmed missing in 2019 in the Mediterranean alone, to which we must add an incalculable number of people about whom nothing more is known – silent deaths that leave few visible traces, but deep wounds in our conscience.

My plea is that each of us can open their heart and lend their arms to help create a global community that shares a common feeling of united, supportive and welcoming humanity, beyond the limitations of geographical belonging.