Art is good when it springs from necessity. This kind of origin is the guarantee of its value; there is no other.

These words came to my mind while watching Ai Weiwei’s documentary during the 6Degrees event in Canada. Human Flow explores what it means to become a refugee, a displaced person; someone forced to flee their homeland against their will and often with no certainty that they we ever be able to go back home.

At MOAS, we have experienced first-hand the consequences of a phenomenon affecting such a huge number of people and, while I watch the documentary, I hope it will touch people’s heart.

As I chatted with Ai Weiwei, it became evident that he has lived such experiences himself, and knows all too well what being a displaced person means, with his personal freedoms limited. This is why he decided to use his art and talents to defend human rights. His art, in whatever form, denounces the brutality of human rights violations against innocent people, who are guilty only of wishing for a decent life. All over the world, yet higher numbers of people are forced to abandon their old life and their loved ones to attempt journeys of hope, which put their own lives at stake in order to reach a safe haven.

The documentary starts with a special focus on the shores of Greece before the EU-Turkey deal came into effect, which has dramatically decreased the number of crossings along the Aegean route where MOAS had deployed a second vessel for as long we were needed. However, Europe, the Mediterranean and Aegean Sea are not the only part of the world covered by Ai Weiwei, as the film ranges both geographically and conceptually.

The reflections in the film about the consequences of not properly addressing the causes of this unprecedented humanitarian crisis are also crucial, as well as the isolation and marginalization that create fertile ground for further divisions. Forcing millions of people to live in a situation of extreme precariousness with no access to education or healthcare, nor to the labour market, deprives them of a future.

For those forced to migrate today, leaving their homeland often means being trapped in a limbo of uncertainty and bureaucracy that is difficult to overcome, since international conventions and agreements to defend human rights seem powerless.

With MOAS, we have often reported the impact of hellish journeys on mental health. We have also documented the denial of the right to health and education, rights which often clash with harsh bureaucratic procedures that exclude people instead of involving them. We have denounced the dangers of human trafficking, whose victims are often vulnerable women or minors in need of protection.

We have spent the last three years at the forefront of this humanitarian crisis, operating in both the Mediterranean and Aegean Seas to avoid unnecessary casualties and give back hope to those who were about to die. We have talked about the atrocious conditions of people forced to migrate, as well as their hopes and dreams. We have tried to preserve a human dimension – so often disregarded when talking about statistics and figures about migration – in order to create empathy. Just as Ai Weiwei walks amid the flows of migrants moving across the world’s borders, MOAS continues to serve our brothers and sisters who are unfairly forced to flee using dangerous routes.

With the same spirit of bearing witness and the will to assist the most vulnerable people, during 6Degrees I introduced our new mission in Bangladesh, in which we are distributing food aid and providing emergency medical assistance. In Shamlapur we have just opened our first MOAS Aid Station, a medical unit able to provide specialized assistance through a fully equipped semi-permanent facility, complete with water and sanitation facilities. This first unit, launched on October 14th, is a model from which to create more Aid Stations in the area and increase our capacity to assist those who are most in need. 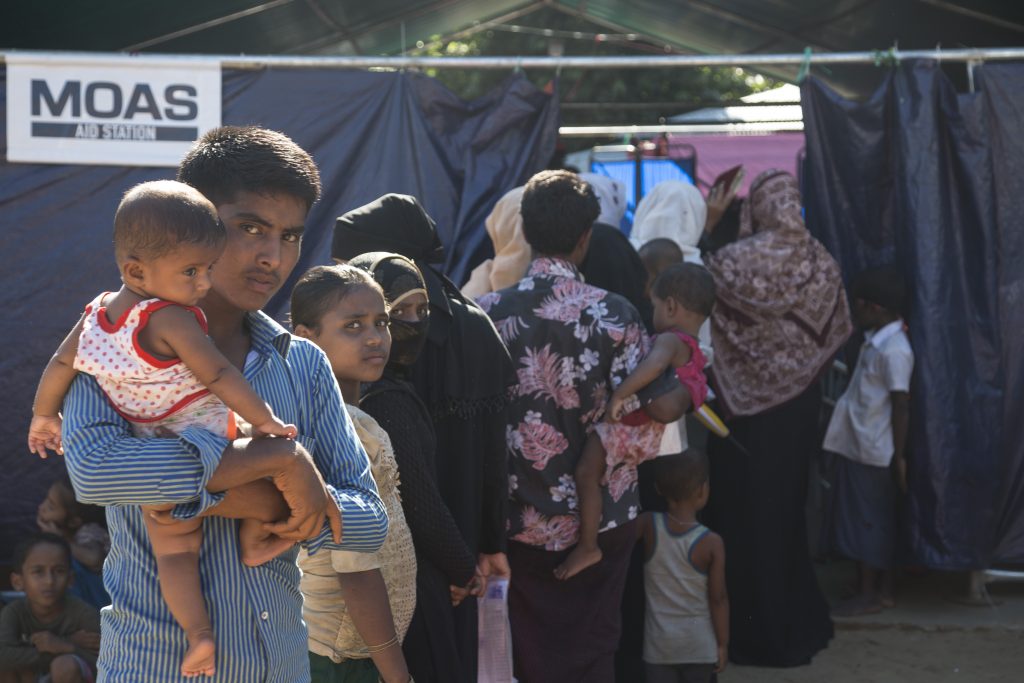 MOAS Italia Copyright_2017 Rohingya people queuing in front of our first MOAS Aid Station launched on Oct 14th in the Shamlapur camp, Bangladesh, to provide medical assistance both to those living inside the camp and to the local Bangladeshi community

“Being a refugee is much more than a political status. It is the most pervasive kind of cruelty that can be exercised against a human being” from Human Flow, a documentary by Ai Weiwei.