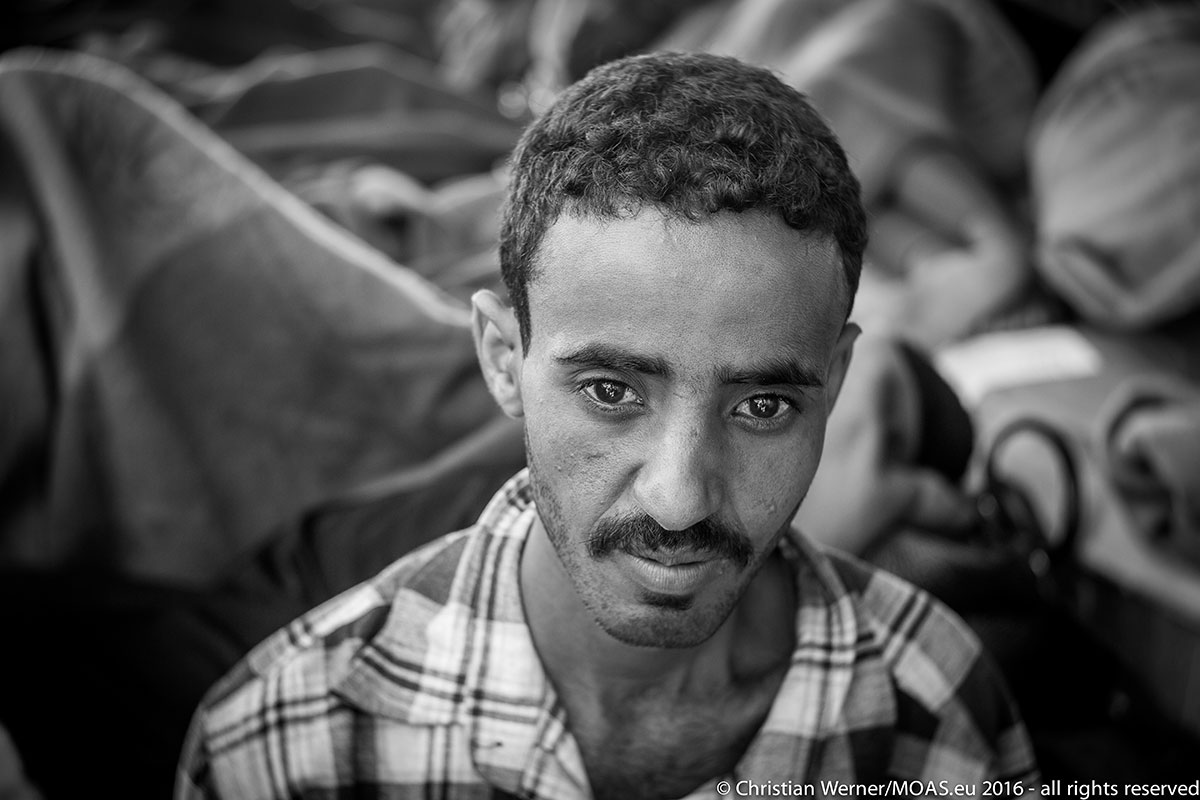 09 Aug 2017 Fradhin: from the nightmare of slavery to the dream of freedom

Posted at 09:00h in blog by admin
Reading Time: 3 minutes

“My dream is to be alive”, this how Fradhin Ali starts his story after being rescued by the MOAS crew. He is 20 and comes from Sudan. In Sudan there is no freedom, he says, and one day he realized that he could not live there any longer. If you openly express your ideas, you risk being jailed. He can only leave his homeland to reach Libya, where he has lived for two and a half years in horrific conditions, as he says: “there is no police. Whoever has a gun can rule.”

Fradhin was kidnapped and enslaved, forced to work as a construction worker until he could escape. He had no alternative other than paying a smuggler to get to Europe, but despite the smuggler’s reassurances he had a bad feeling. He ended up with 40 people in an empty house with no windows close to the shore, and every time his jailers came they beat people with sticks, while women were constantly crying.

Fradhin tells this terrible story to me after being treated and fed by the MOAS team, and against all odds he can still dream of going to England, studying and helping Sudanese people.

The story of this young Sudanese guy is a clear example of two desperate situations that require immediate interventions from our international community: the one in Libya and the one in Sudan.

As often reported, Libya has been ravaged by years of conflict as well as political and institutional instability impeding all control over rebel militias and groups. Smuggling networks thrive, and migrants lose rights and dignity: they become goods, victims of awful abuse or trafficking, or are sold in modern slave markets.

Even if the situation in Libya is well-known, nothing has been done so far, and we still break articles 4 and 5 of the Universal Declaration of Human Rights affirming that no human being can be held in slavery or subject to torture and degrading treatment. Once again the rights enshrined in agreements and declarations are broken, and we appear not to see or understand the contradiction.

Besides the dramatic situation in Libya, a country of transit, also in Fradhin’s homeland of Sudan things are desperate because of the bloody conflicts that have brought its population to its knees and created the current humanitarian catastrophe. As highlighted by the UN Office for the Coordination of Humanitarian Affairs (OCHA) in its 2017 report, 4.8 million people are currently in need of humanitarian assistance in Sudan, a country devastated by political instability as well as environmental factors and constant migration flows from neighboring countries.

Desertification and uncontrolled rainfall with consequent flooding have worsened the living conditions in a country devastated by widespread malnutrition and food insecurity. Apart from the lack of freedom denounced by Fradhin, in Sudan people die from starvation or thirst.

In light of this, interventions at local level are more and more urgent in order to stabilize the living conditions in those countries generating the highest number of refugees. Nobody should be forced to flee their home country to avoid death. However, since this approach would require time and investment, we need to find immediate solutions to mitigate the consequences of the ongoing catastrophes.

Since August 2016, MOAS has been calling for the opening of humanitarian corridors from Libya to the countries hosting people who may receive asylum. People would be scrutinized in advance according to International Law criteria, to the needs of the welcoming country and with a special focus on vulnerability.

People should no longer have to risk their lives simply to be safe!