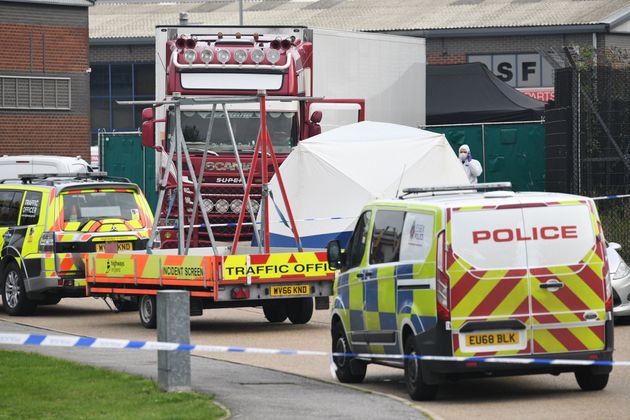 “I’m sorry mom. My trip abroad did not go well. I love you so much! I’m dying because I can’t breathe”. A desperate message that could come from one of the many borders that separate the world of those who flee from the world of those who should welcome. It could have been sent from the border between United States and Mexico, from the one between Myanmar and Bangladesh, from the waters of the Mediterranean. But this dramatic message comes from the heart of Europe.

It was sent by Pham Thi Tra’ My, a 26-year-old Vietnamese woman, who wrote to her mother for the last time from on board of the truck that was found dead in 23rd October in an industrial state Essex, in the south-east of England, Along with the young woman, 38 other bodies were found, including that of a teenager, who died from asphyxiation or hypothermia having been locked inside the vehicle for days. This is yet another example of the tragedies that can happen for those that are forced to make unregulated migration journeys. According to the initial investigations, the refrigerated truck, and which had written on the windscreen the macabre message “The ultimate dream”, would have left Bulgaria and arrived by ferry to Purfleet on the Thames, Essex from Zeebrugge, Belgium.

In recent years, many people have tried to reach the UK, crammed into containers of vehicles or on ships crossing the English Channel. With the intensification of border controls in the Channel, the journeys of hope are forced to take alternative routes, such as that traveled by the truck, in order to avoid travelling the well policed route between Calais and Dover.

The journey ended in a parking lot in an industrial area where those onboard human beings were abandoned without dignity as though they were any other type of goods to be transported from one place to another.

A tragedy not new to Britain , a similar event had already occured in 2000 in Dover when 58 Chinese migrants were found dead in a truck , an example of yet another infernal journey organized by networks of human traffickers who profit from the desperation of illegal immigration. Not far from the truck, the driver was trying to escape, leaving behind the horror that was left there.

We all have the responsibility not to look the other way, not to flee with inhumanity as the driver did who, careless of the life of human beings he carried, betrayed our humanity.

Human trafficking from Asia, and in particular from China, is poorly documented. Published data on illegal immigration from the East by British institutions is outdated and incomplete. The latest information, published by the government in 2014,estimates that thousands of migrants are arriving via irregular routes from China to the UK.

Through MOAS’ missions in Asia, I had the opportunity to learn about the migration dynamics ofthis area , especially of Myanmar and Bangladesh, and the opportunity to testify how serious the situation is and how ,in the coming years , the numbers of people making such journeys will only increase.

The grief of the political community over what has happened should be transformed, with the appropriate legislative instruments, into immediate measures to prevent such a tragedy from happening again. But, as the experience of recent years teaches us, the emotion of the moment does not prelude any real commitment.

We are witnessing, the continued loss of life of many of the people that leave their homes and their land in search of a better life. Such A situation could be prevented if safe routes and legal channels to access Europe were established, the only alternatives to the “journey of death”. For this reason, together with MOAS, I do not get tired of repeating the need and urgency to start and ensure a system of facilitation to allow people to obtain entry visas and to prevent this loss of humanity. Together with the urgency of educating young people about legal entry channels , it is also important to educate people about the importance of not getting involved with human traffickers, who treat people’s lives as a game of Russian roulette, constantly challenging the boundary between life and death.