On December 7th Mernahar came to our MOAS Aid Station in Unchiprang with her new-born grand-daughter in her arms. The baby -born 7 days earlier- needed medical assistance, so her grand-mother asked for some help to our dedicated team, that is unceasingly working to mitigate the atrocious consequences of the Rohingyas’ exodus: between August 25th and December 21st at least 655,000 Rohingya people have crossed the border with Bangladesh and challenged a country exposed to endemic poverty and natural disasters. According to official estimates as of December 21st 720,000 children are in urgent need of humanitarian assistance; 1.2 million people need help; almost 380,000 newly arrived children need humanitarian support.

The baby brought by her grand-mother at the heart of this story is one of them, and we could have lost track of her, if our medical team had not borne witness to it. Furthermore, as they understood that the baby had been recently delivered, they asked about the new mother who was eventually brought to our clinic thanks to her family members. The woman told us that her daughter, who delivered the baby, had been locked inside their home before it was set on fire by the army in Myanmar. By miracle she survived, but Fatema at the age of 25 was severely injured and had to face a horrific journey to reach Bangladesh while pregnant and with no assistance. During clashes she saw the husband of another daughter being killed, and they could just leave the country, according to Mernahar. Three months earlier, in September, Fatema arrived in Bangladesh with her husband, married one year before, and she settled among thousands of other refugees. But soon after, her husband left here alone with her traumas, as well as physical and psychological suffering, and he disappeared soon before delivering their first daughter. 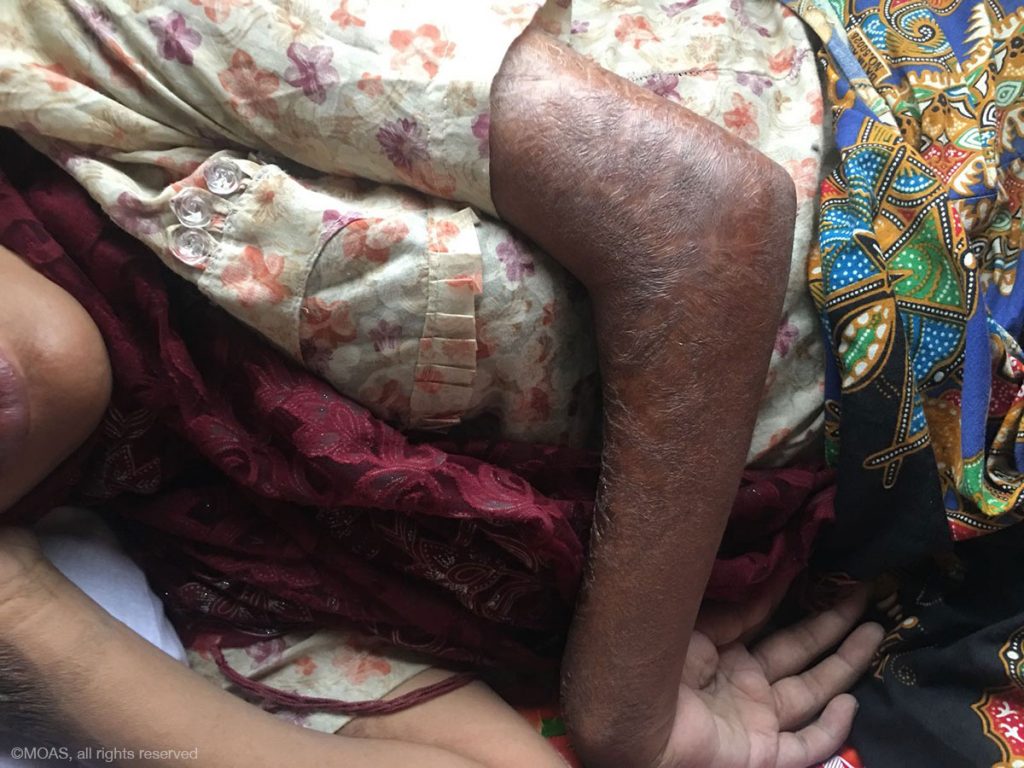 Fatema was brought by her family members with an hand-made stretcher because she cannot walk, and upon her arrival at our MOAS Aid Station we all tried to comfort and reassure her after providing the sorely-needed medical assistance. Such massive influx of desperate and vulnerable people in need of everything strained Bangladeshi resources, but the country is still giving us an historical lesson of solidarity and responsibility toward persecuted and vulnerable people. This is why with our mission in SE-Asia we bring humanitarian aid and medical care, we assist newly or previously arrived Rohingya people who live in camps around the country and we grant emergency assistance to local communities too.

Out at sea we are all the same, and there is no difference between wealthy and poor, between educated and illiterate people, between atheists and believers. The very same happens with suffering and illnesses: we are all the same and in need of care both for our bodies and souls. Sometimes Rohingyas only come for a visit to sit down on a chair in the shadow and in a welcoming environment where they can use our sanitation facilities and clean water or wash their hands following the instructions of our medical team.

As the Phoenix used to be a symbol of hope in the sea of indifference, our MOAS Aid Stations in Bangladesh are oasis of humanity and dignity in the midst of an unprecedented exodus.

*The woman’s name has been changed to protect her privacy

This article was published by an Italian magazine