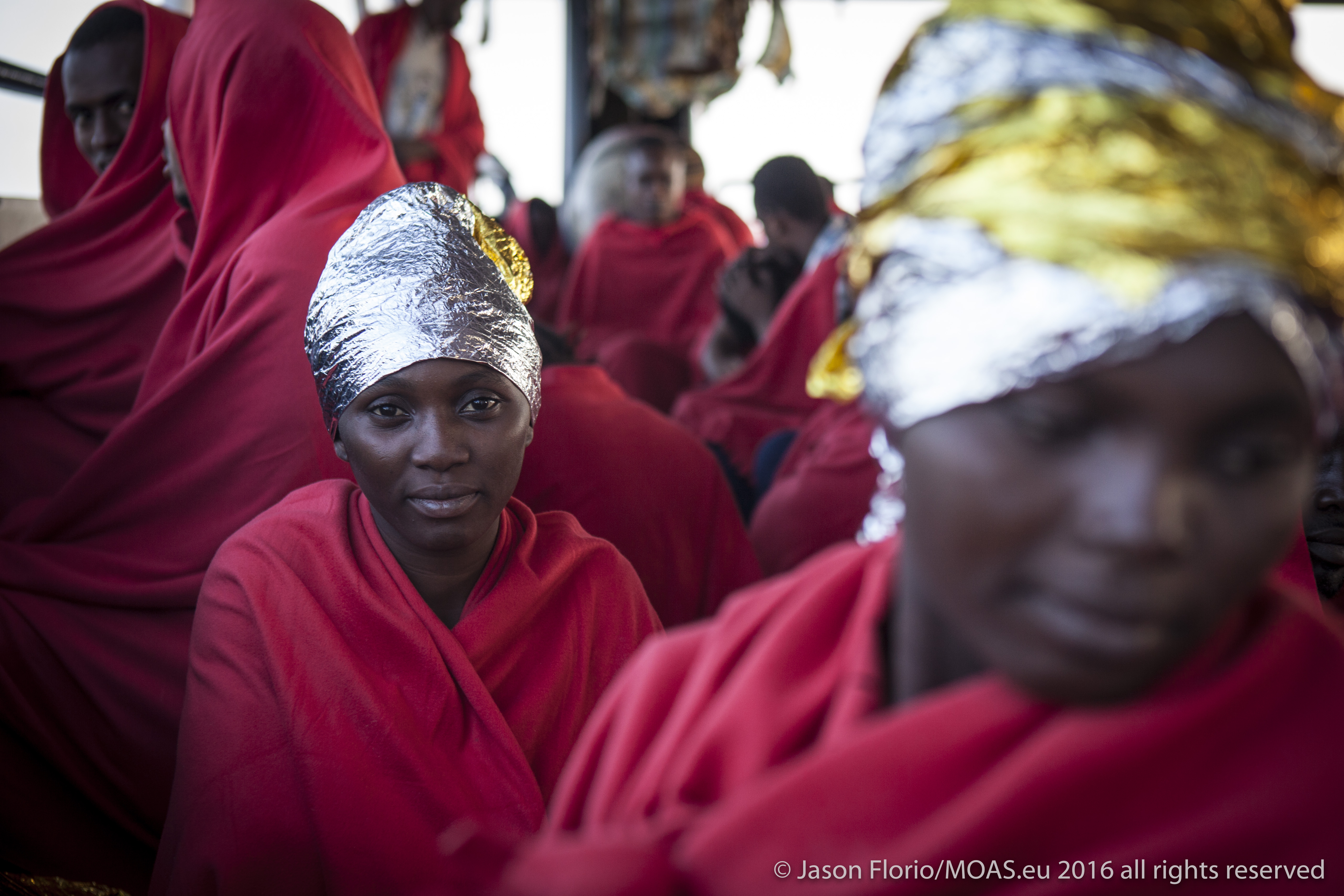 06 Oct 2017 Caroline: a story of trafficking and mercy

On July 20th IOM released a report exploring human trafficking along the Central Mediterranean route, with a special focus on women and girls who often travel alone from Nigeria and represent the most vulnerable group as well as those exposed to the highest risk of being trapped in prostitution networks. According to IOM, there are some indicators to monitor in order to spot potential victims of human trafficking: gender (they are mainly women); age between 15 and 24; nation and region of origin and psychophysical condition, since they are very shy due to severe psychological pressure.

Since 2014 during MOAS’ missions I have had the chance to listen to the stories of many Nigerian women who left with many dreams that were destroyed during the journey by the violence to their body and soul. It is important to remember that abuses are not just physical, but also psychological.

There is one story which I still vividly remember.

Caroline is 19 and comes from the Delta region in Nigeria. Like thousands of girls, she naively fell into the hands of traffickers who promised her an opportunity to study to become a nurse and find a decent job in Europe, but who then began to take control of her life. A man who looked reassuring found Caroline in her village and persuaded her to follow him, but she soon lost all rights and her life became a cycle of abuse and violence. In Agadez, Niger, one of the main hubs for sex traffickers together with Benin City, she was sold with 30 girls to a local brothel. After being brought to Sebha in Libya, she was jailed with 150 people, and her sister had to pay a 600 Libyan dinar ransom to released her. After she was free to leave prison, Caroline met a Nigerian woman who helped her to get to Sabratha. From this place she could attempt the Mediterranean crossing, which was the only option she had to leave Libya alive, a country that Flavio Di Giacomo, IOM Spokesperson, defined as a “black hole from a humanitarian point of view”. 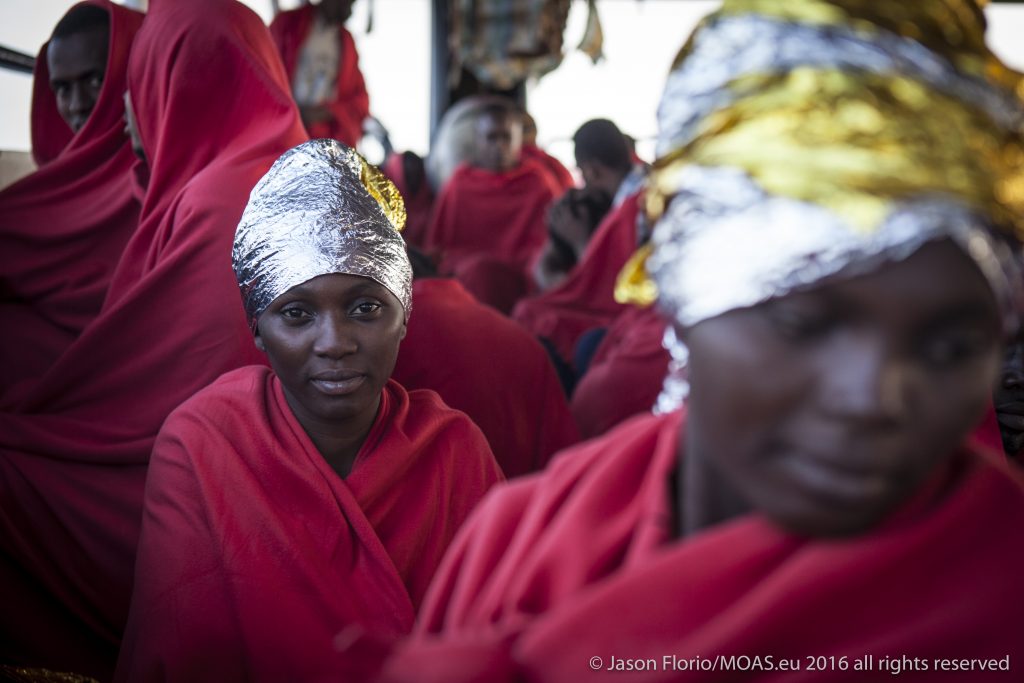 Caroline a 19 year old student from Delta State, Nigeria, rescued by MOAS during our past SAR operations in the Central Med

Human trafficking aimed at sexual slavery belongs to a larger phenomenon of human trafficking, whose victims are people deprived of their fundamental rights and turned into commodities within rooted criminal networks.

Women and girls from Nigeria make up the highest percentage of female migrants compared to other countries, and their arrivals have remarkably increase over the last years. In 2014 1,450 Nigerian women were officially recorded in Sicilian disembarkation ports; in 2015 they were 5,600, while 2016 saw the unprecedented arrivals of 11,009 women. Figures clearly show a growing business, whose victims are unaware and often manipulated women who look for a better future. However, such growth cannot be explained only referring to traffickers, but also to their clients who accept the slavery of women who are cruelly “prostituted” by others, as stated by Anna Pozzi, a journalist who has often documented this topic.

The body of the younger and younger victims bears evidence of their abuse both through scars and pregnancies: many face the journey while pregnant; others are found to be pregnant on board after medical checks by our post-rescue team; many others bring the outcome of previous violence with them, in the hope their children will not experience the same fate.

Nevertheless, as a woman and as a mother, I am not only worried about physical wounds. I am afraid of the wounds to the heart of these women who find themselves trapped in an endless nightmare. When I listen to their stories, I am more and more persuaded that we cannot ignore such violations, that condemning thousands of women to sexual slavery will not help us in building a fairer world based on solidarity.

In Africa, traffickers can rely on impunity and on victims’ ignorance, since there is no way of monitoring this phenomenon. Nevertheless, after arriving in Italy their situation does not get any better. Their nightmare continues and becomes part of a daily life made of voodoo rituals and threats to pay a debt, that many did not even know existed.

Attracted by the promise of a decent life in an apparently rich world where they may be allowed to develop their talent, they find themselves trapped in hell with no way out since their jailers exploit their status as irregular migrants to make money from their bodies. As for migration flows in general, the lack of safe and legal alternatives due to the lack of legal rules makes traffickers stronger and their extremely young victims weaker with no support. After losing all their dreams, they become a mass of invisible people marginalized by our society, that often acknowledge them only when it comes to security, more than human rights. Moreover, as reported by IOM, Italy is not able to grant the right protection to victims of trafficking, and it is estimated that around 80% of the 11,009 Nigerian women arrived in Italy in 2016 got trapped in sexual slavery. But there are only 1,600 places available to provide shelter to those who escape this horrible business.

Now more than ever it is necessary to act at different levels to eradicate such complex phenomenon. First of all, we need to raise awareness in the countries of origin in order to erase misleading illusions and migration triggering factors thanks to local development projects. While working with a long-term perspective, we also have to commit ourselves to open legal routes to give adequate protection to sexually abused women. As MOAS highlighted, the opening of humanitarian corridors would deprive traffickers of their young commodities: women would, thus, enjoy again fundamental human rights and dignity. So, they would be able to build their own life and fulfill their dreams while integrating in the hosting country and making it home.

In the end, beyond a legal approach and sentencing those who violate human rights, a genuine cultural change is urgently needed. We have to work on empathy and promote a culture focused on the safeguarding of human rights. Only by doing so, we would stop looking at prostitution in terms of city security or degradation, and we would focus on the unfair fate of every Caroline sold amid great indifference to those who pay a small price for her young body.