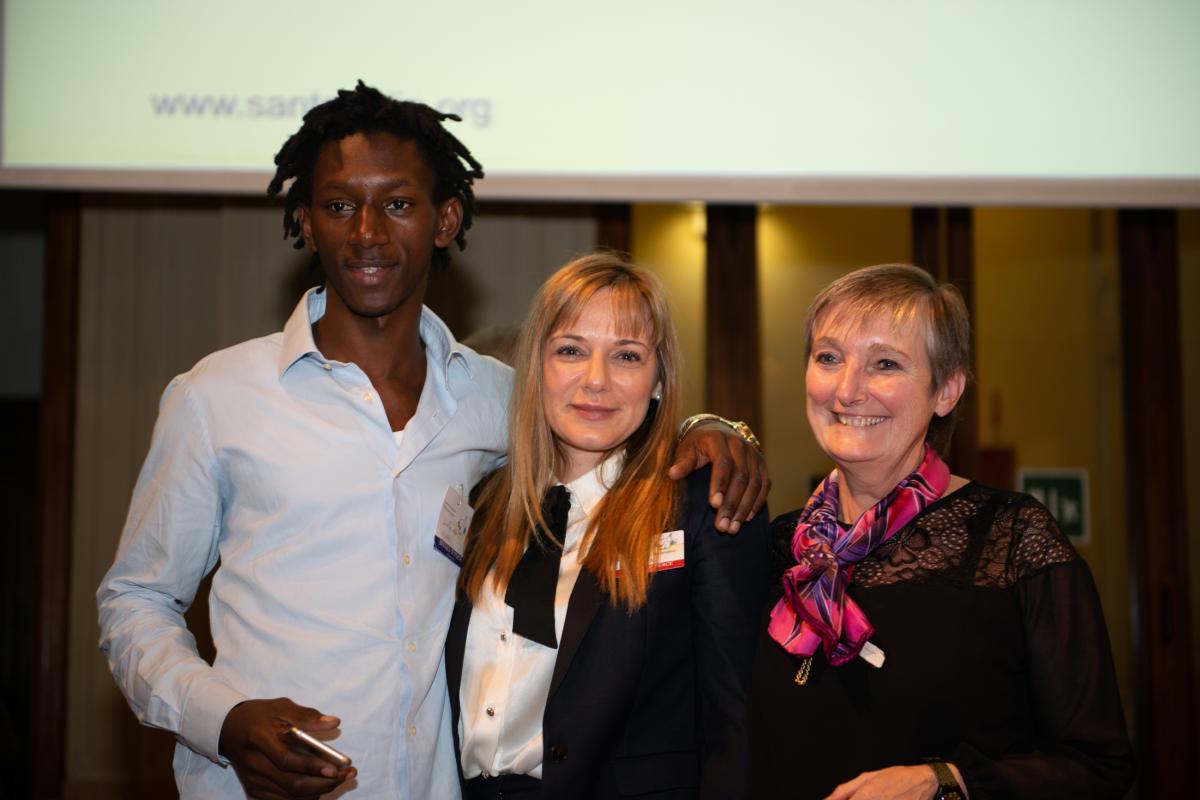 30 Oct 2018 Bridges of Peace 2018: a discussion about humanitarian corridors the meeting with Alpha, a young man rescued by MOAS

On October 15th, I participated in a panel about humanitarian corridors as part of the event Bridges of Peace 2018 organised by the Community of Sant’Egidio to discuss global migrations, people and solidarity.

This occasion was more special than any other previous event. All of a sudden, a young man stood up and said that he was saved by MOAS in October 2016. At the time of the rescue, Alpha had lost hope of surviving. Before starting, I expressed my sorrow, because I had never had the chance to meet him, a person rescued by MOAS. Two years after Alpha’s rescue at sea, we met in Bologna, where he also explained how the Community of Sant’Egidio helped him to learn Italian and integrate in his host community. The story of this young man from Guinea Conakry illustrates how important it is to combine rescues and integration to prevent marginalisation, discrimination and exploitation.

After showing a short video of MOAS’ history and developments, I talked about our achievements in Bangladesh, where two Aid Stations provide sorely needed medical assistance after the unparalleled exodusRohingya from Myanmar. Between October 2017 and August 2018, more than 87,000 children, women and men -both Rohingya and Bangladeshi- were assisted by our medical teams. In some cases, it was the first time they Rohingya. During my speech, I talked about two of the many people I have met during MOAS missions: Yussuf (65) a Syrian man rescued at sea, and Jhanu (40) a Rohingya mother of seven who saw her husband slaughtered by Burmese armed men in August 2017. When asked why he decided to attempt such a dangerous journey, Yussuf replied: “If you see your home burning, you’ll jump from the window, even if you are not sure if you’ll suvive”. Jhanu shared her concerns about raising her teenage daughters in unsafe and overcrowded camps, her hope for a bright future together with her family members who survived and her doubts about repatriation. Before I left, she asked me to tell her story, to spread her testimonial and raise awareness on the Rohingya tragedy. 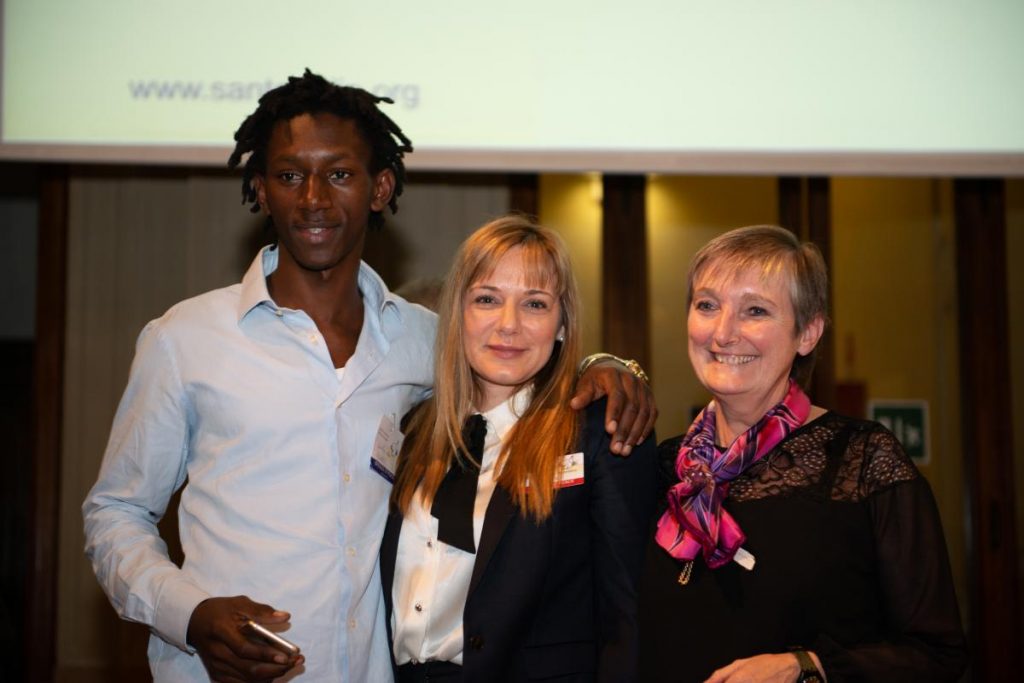 After the end of my speech, Oliviero Forti (Caritas Italiana) took the floor and explained how Caritas Italiana -which also supported MOAS SAR missions- is usually known for welcoming people, but has broadened its scope with humanitarian corridors, because “it’s a historic need”. Their new activities specifically concern the creation of safe and legal alternatives to rescue people. Apart from humanitarian corridors, they have also implemented evacuations from Libya and humanitarian visas, as well as reinforced family reunification. Oliviero was aware of the many people in need, but concluded “We know that we are not the solution to global migration, but we want to launch a clear political message”. This message is shared by those who work every day to support migrants and refugees, and it concerns an alternative way to deal with migrants and refugees. Additionally, we should use all necessary instruments to save people and build inclusive societies, as stated by Daniela Pompei who is responsible for humanitarian corridors at Sant’Egidio and explained how to build them, through rational management of migration flows.

Then, Father Solalinde joined the conversation and talked about his work with transit migrants between Mexico and the USA, along a perilous route marked by escalating violence and exploitation of desperate migrants. His stories were very similar to what happens along the Mediterranean route or to the Rohingya minority. “Traffickers exploit forced migration, and their trade is based on human life. If people are too poor, they become a commodity themselves”, he added. When I listened to him, my mind recalled the stories of those rescued at sea or on land in Bangladesh. No border is insurmountable for a mother seeking safety for her family.

What’s the solution for a deteriorating situation? Empathy, humanity, and a global humanitarian corridor that Father Solalinde conceives as a movement of globalised solidarity, as a full set of personal and institutional initiatives and as an imaginary meeting place. The solution is to build bridge of peace every day, like the ones created in Bologna with our friends from Sant’Egidio. 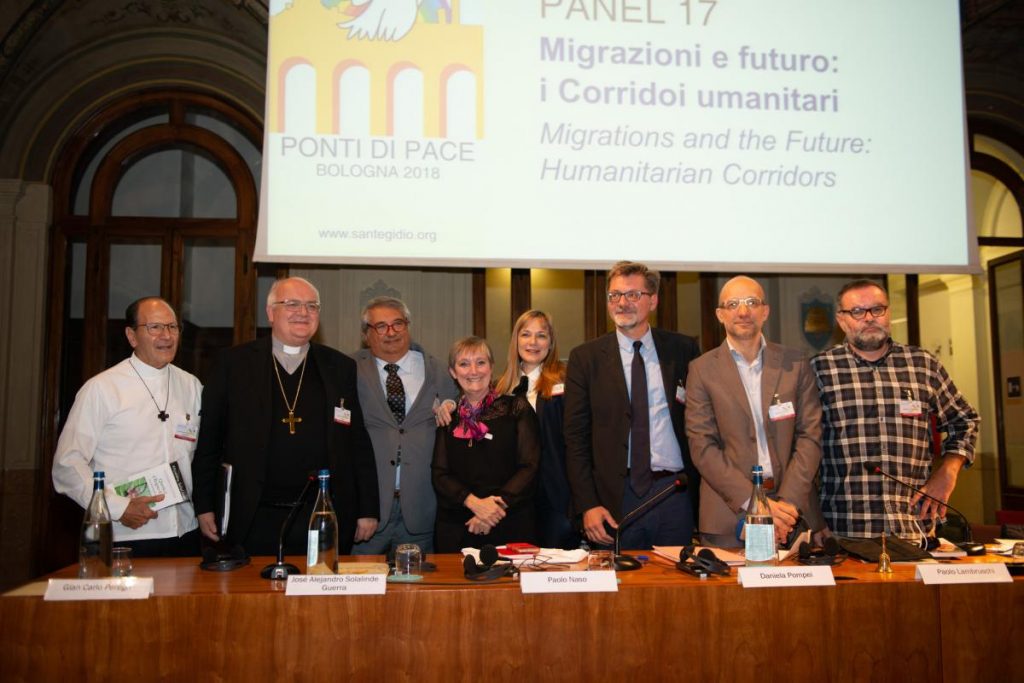