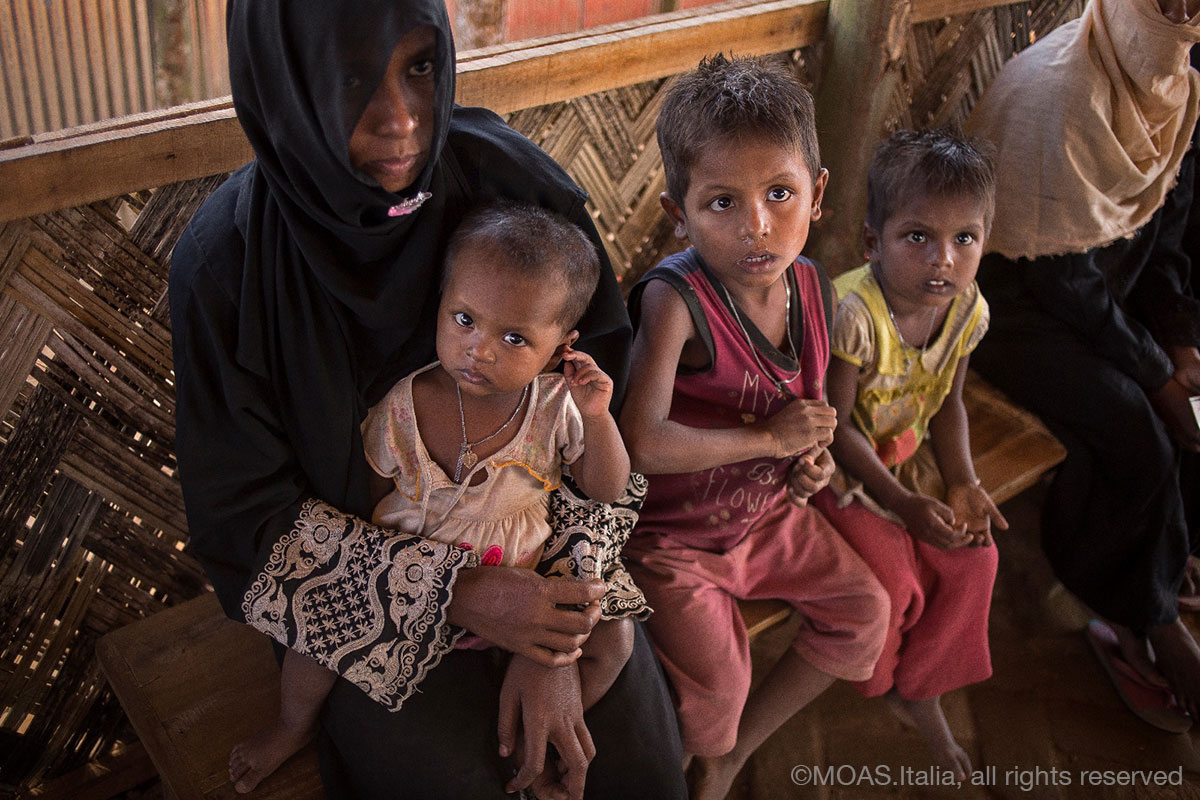 Bangladesh is a lower middle income country with high rates of endemic poverty, malnutrition and food insecurity. The area became independent after the end of British colonial rule in 1947, when Bengal was split into the new-born Pakistan and India, but defining national borders was not easy and the process led to conflicts. Bangladesh gained independence as a nation in December 1971 after Pakistani defense forces surrendered and withdrew, but the country then faced huge problems such as the restoration of public transport and communication, as well as of international trade. Education and health system were also became top priorities, together with the strengthening of agricultural and industrial production. Despite these efforts, a famine hit the country in 1974 and killed thousands of people, while political instability has become a permanent concern, although significant progress has been achieved. The general situation was worsened by massive exoduses of Rohingya during the 70s and the 90s: in both cases more than 200,000 people were forced to flee Myanmar and seek sanctuary in Bangladesh to survive violence and repression at the hands of the Burmese army.

New cases of violence were recorded from 2012. Between 2012 and 2015 an estimated 125,000 people fled and ran for their lives, mainly along sea routes which claimed the lives of many on the so-called “ghost boats”. New clashes occurred soon after, in 2016, triggering massive waves of violence across Rhakine State, where women reported rape and sexual violence, men were tortured while in prison and consequently around 100,000 people became displaced. Of these, at least 74,000 arrived in Bangladesh. 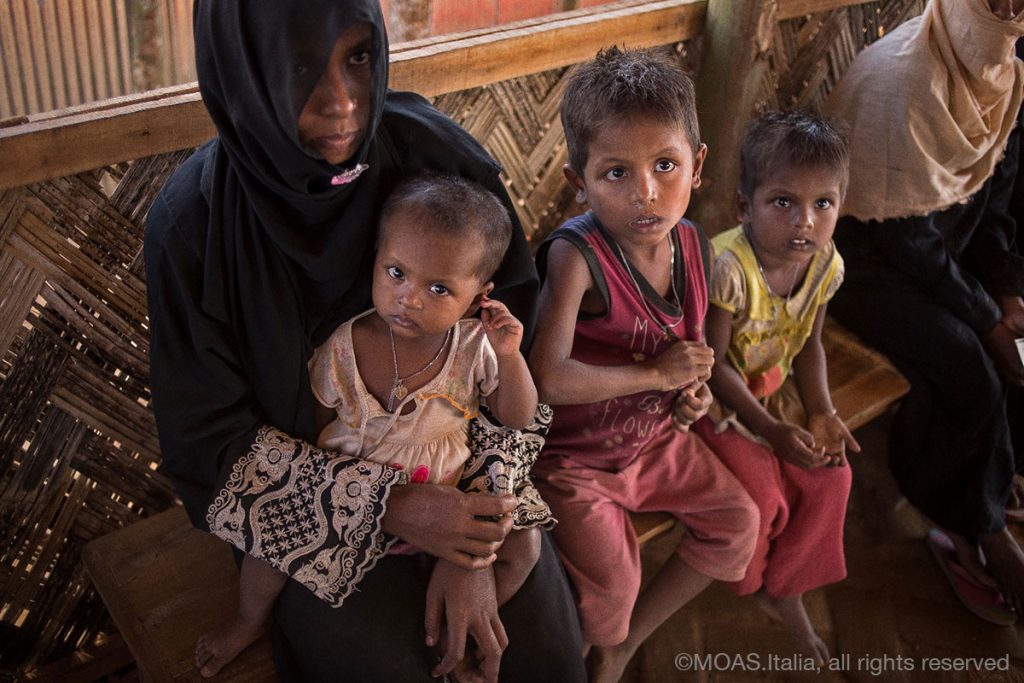 This insight into Rohingya migration flows partially explains their grim reality as persecuted, unwanted and rejected people, and acknowledges the remarkable humanitarian efforts carried out by the Bangladeshi government and local communities which host them. Despite being a poor country, exposed to and often hit by natural disasters, Bangladesh has opened its borders and hearts to share land and resources with its Rohingya brother and sisters fleeing a life of violence and marginalization.

The latest data by the World Food Program depict an alarming reality where 31.5% of people live in poverty and one person in four is food insecure. Last September, one month after the Rohingya exodus had started from Myanmar into Bangladesh, the WFP, which has been present in Bangladesh since 1974, launched a Level 3 Emergency Response to tackle new challenges and risks, aiming at assisting more than 1 million people in total. The side effects of such endemic poverty and food insecurity range from consequences for people’s health, such as malnutrition or undernutrition, to children being deprived of a decent education and forced into the labour market, early marriage or prostitution.

In light of this scenario and following Pope Francis’ appeal to support our Rohingya brothers and sisters whose suffering is immense, last August with MOAS we decided to suspend our SAR activities in the Mediterranean Sea to bring them sorely-needed humanitarian aid and urgent medical care and assistance. We developed a flexible and replicable model of medical units called MOAS Aid Stations, based on a needs-assessment of refugee camps and makeshift settlements, in order to provide the best care possible. Our first MOAS Aid Station was opened on October 14th in Shamlapur, during my first visit to monitor the progress and development of our SE-Asia mission on the ground. The second Aid Station was launched less than one month later, on November 10th, in Unchiprang.

As highlighted by the WFP’s Deputy Country Director in Bangladesh, Dipayan Bhattacharyya, Rohingya refugees “are coming in nutritionally deprived, they have been cut off from a normal flow of food for possibly more than a month.” This explains why the line in front of our Aid Station in Shamlapur was growing longer every day: during the first week alone, we managed to treat and assist 1,500 patients whose recovery was closely monitored, and we are keeping up an average of 300 patients visited per day in each Station. In fact, our goal is to reach an even larger number of people in need with our Unchiprang Aid Station, and also to help the NGOs operating on the ground whose services and facilities are pushed to the limit. Most illnesses are caused by dire, unhealthy conditions in the camps, where a lack of adequate sanitation facilities increases the risk of water-borne diseases. So, raising awareness about health risks and preventing the escalation of malnutrition are relevant activities which we carry out on a daily basis.

Last but not least, MOAS is there to bring hope and comfort: we will not only treat their bodies, but we will take special care of their souls. We will show them love and solidarity, and will open the doors at our Aid Stations to everyone: both Rohingya and Bangladeshi people will be welcome at MOAS’ premises and we will grant them the best assistance possible. We believe that people enjoy universal human rights that should never be violated, and that solidarity, mercy and brotherhood have no borders. 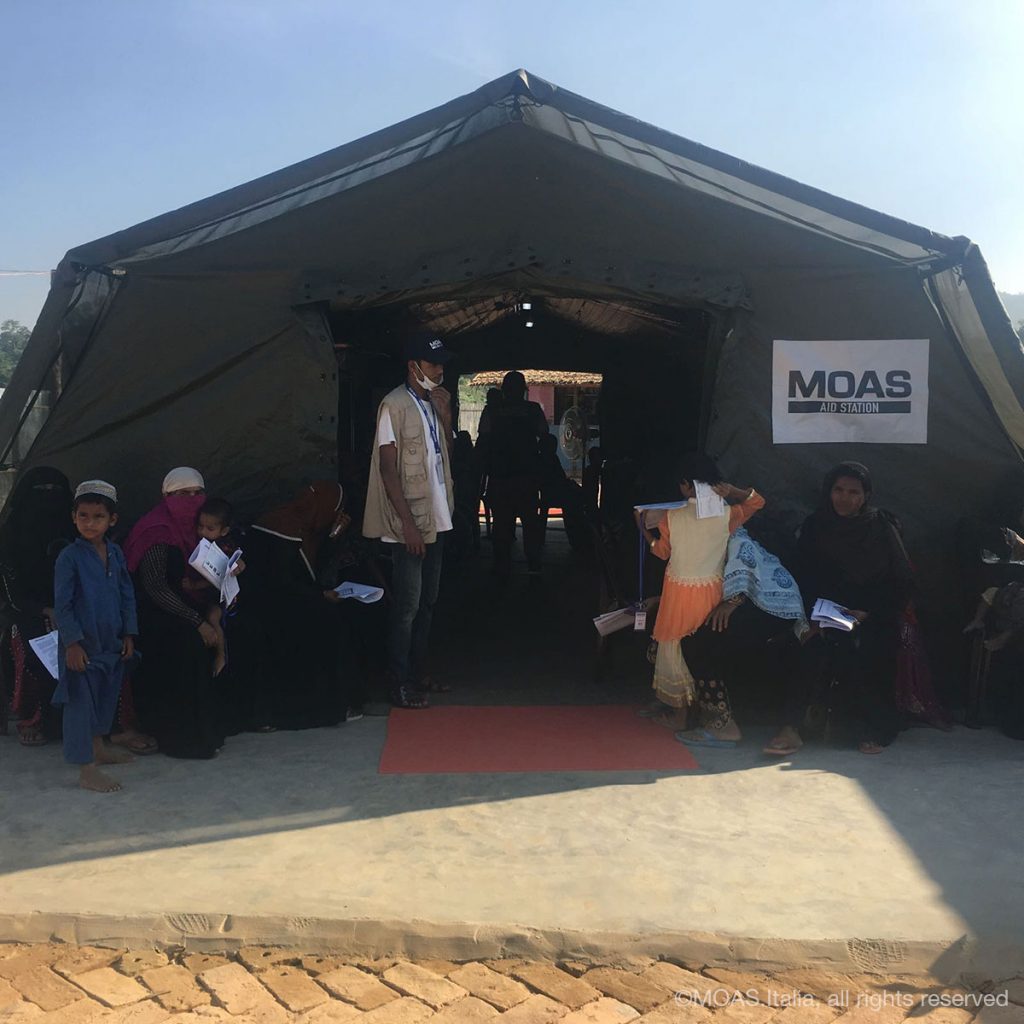 Our MOAS Aid Station in Unchiprang