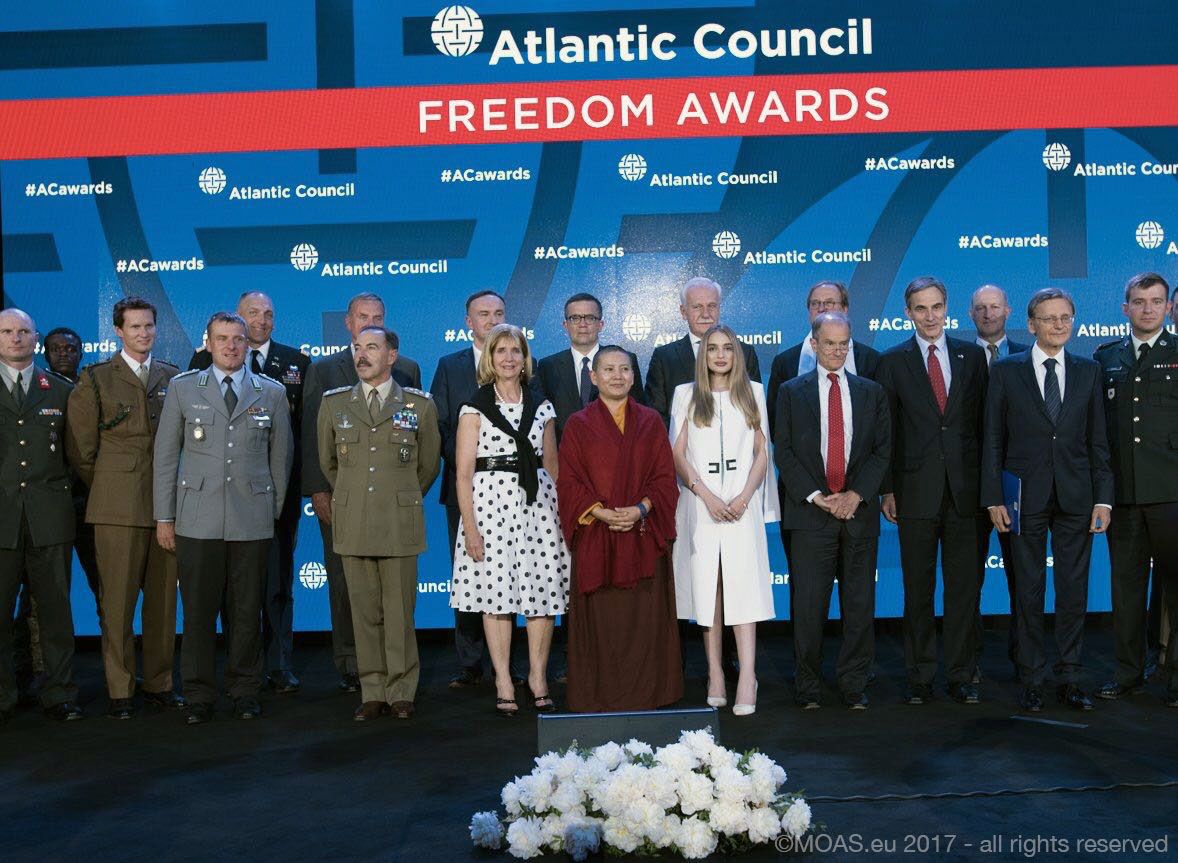 Posted at 09:15h in blog by admin
Reading Time: 3 minutes

The Atlantic Council Freedom Award recognizes extraordinary individuals and organizations that defend and advance the cause of freedom around the world, with a view to strengthening transatlantic leadership on global values. The award was launched in 2009, 20 years after the fall of the Berlin Wall, and aimed to acknowledge efforts to achieve peace and put an end to the Cold War. During its first edition, among others Hillary Clinton was received the award on behalf of the American people. Three years later, in 2012, the award was given to Emma Bonino, Vice President of the Italian Senate and Trustee of the Arab Democracy, while in 2016 the bravery of the Syrian White Helmets was officially recognized in light of their efforts to rescue people from rubble and debris.

This year the award went to MOAS because of our engagement in saving human lives at sea and mitigating the impact of the ongoing humanitarian crisis. It was our great honour and privilege to receive this prestigious award, thus acknowledging the importance of our pioneering mission that has inspired many others.

On the same evening, four other awardees received the prize: Ani Choying Drolma, a Nepalese Buddhist nun well-known for her humanitarian efforts in increasing access to education among young girls; Daniel Fried, Former US Ambassador to Poland who is one of the longest-serving US diplomats; Zbigniew Brzezinski, US National Security Advisor to President Jimmy Carter, and MOAS, the only NGO on stage.

Maria Luisa, our daughter, went to Warsaw and received the award on behalf of the whole MOAS team. Before giving her speech, she was introduced by a video message sent by President of Malta Marie Louise Coleiro Preca and a video showing MOAS’ activities at sea. The award was then given to her by Stephen J Hadley, who served as national security advisor in the George W. Bush administration.

Maria Luisa introduced her speech by giving an overview on current migration flows, whose consequences are before our eyes every single day. Facing the 65 million people who are forcibly displaced around the world and recognizing the alarming rate of casualties at sea, in 2013 our family decided to invest money, passion, energy and funds to make a contribution and save people in distress at sea.

MOAS provides the evidence that everyone can do something to fight what Pope Francis defines as the “globalization of indifference”; we can all prevent the world from drowning in a sea of indifference while our brothers and sisters lose their lives as they seek refuge from violence and war.

MOAS has not been an easy journey, but our family, together with supporters from all over the world, has never regretted the decision of being at the forefront of this humanitarian crisis, one that appears to be a “crisis of humanity”.

Moreover, by creating MOAS, we also wanted to shift the focus of the media and humanitarian organizations from the situation on land to the sea and set an example for others to follow. We are glad to see that many other organizations followed our footsteps and joined us in our efforts to rescue people out at sea.

From its inception in 2014, we have rescued and assisted more than 39,000 children, women and men and we are ready to do more! It is time to go further and use the lessons learned to improve the scope of our mission. Maritime SAR operations are crucial to avoiding the loss of lives at sea, but it is our intention to stop the fatal journeys in the long-run through the opening of humanitarian corridors in origin and transit countries.

Humanitarian corridors, together with resettlement and relocation policies, are not just a tool needed to avoid the loss of human lives at sea, but also a way to prevent people from putting their lives in traffickers’ hands.

We cannot stand by and watch any longer. We cannot turn our head and pretend that this humanitarian crisis is not affecting us. It is.

And MOAS received this prestigious award because, faced with migratory challenges, we decided to lead a community choosing courage over apathy and inaction.