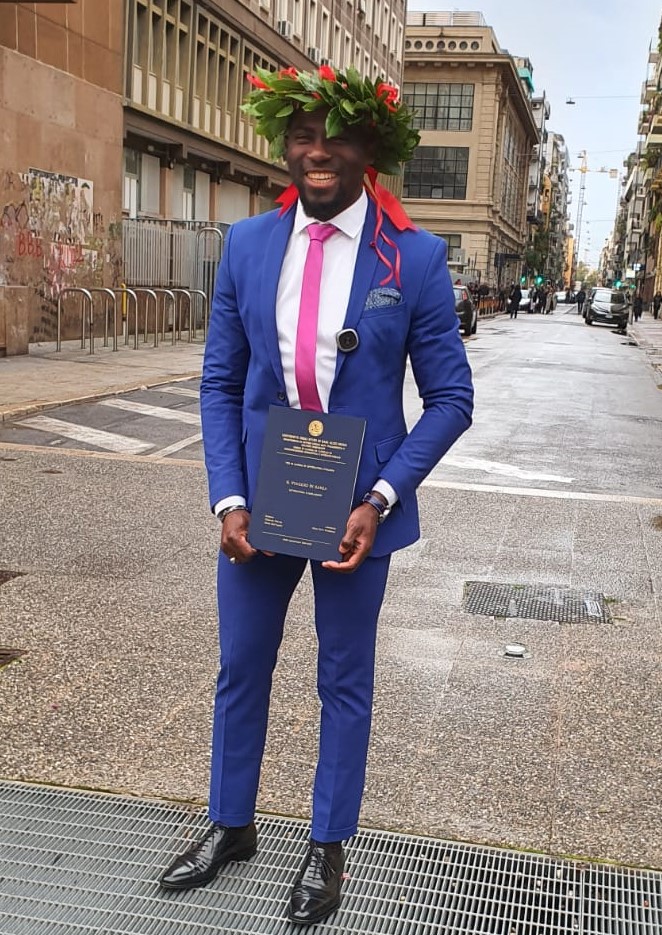 A few days ago, on February 14th, while many were distracted by the celebrations of Valentine’s Day, we dedicated our best wishes to Afana for reaching his goal of completing a degree in Linguistic and Intercultural Communication at the Università di Bari, through love and dedication. I met Afana in one of the last missions of 2014 led by MOAS on the ship Phoenix that saved his life in the waters of the Mediterranean.

Afana is a young Cameroonian who, because of political persecution, fled his home country to reach Tunisia by plane with a tourist permit. He was looking for a new life in a state those who manifest their disagreement with the system do not risk ending up in prison. When he arrived in Tunisia, he told us, he realized that the reality was quite different from what he had imagined, that most employers put into practice the strategy of the withdrawal of passports, in order to make any further movement impossible without satisfying the demands of their blackmail. Afana managed to get his passport back, declaring that he had to return to his home country, and he decided to move on again. The new destination identified was Europe.

As he tells us, one night he began his journey, crossing the desert border between Tunisia and Libya, walking for about 10 hours on foot, with the hope of boarding a ship. In fact, before leaving Libya, he would be forced to live for a month in a kind of ghetto, under the control of armed gangs that perpetrate all kinds of bullying and violence before the helpless eyes of children, women and men. Like everyone else, Afana found himself in a situation he never imagined. After the first moments of terror and despondency he pulled together all his strength and his survival instinct and understood that he could do nothing but grit his teeth and try to move on. Afana told us that in those days he came to understand the true meaning of life, the value of life and the lack of control we can have over what happens to us. He confesses that:

“When things happen, you have to know how to caress them in the right way. The helplessness experienced when someone is raped for the first time in front of your eyes caused a total despair. The first times you can’t hold back the tears, then those brutal gestures become normal and the survival instinct takes over. You realize that the next victim could be you. And get ready. You’re just thinking about surviving. Rape seems to you the lesser evil, the important thing is to live. Between terror and violence were our tormentors who were dehumanizing us. But in the evening, when we could, we helped to escape women and children to prevent them from seeing such atrocities.”

After a month, on 30th September, having taken them to a beach, the traffickers said that a large wooden ship would be waiting for them and that it would take a few minutes of sailing in a dinghy to reach it. At 9pm there are about 200 people gathered on the beach and they are put into two dinghies. On the one in which Afana was located there were about 90 people. Around 15 minutes after departure the other dinghy capsized and, between the sound of screams, the passengers drown in the cold waters of the Mediterranean. Panic spread on Afana’s dinghy as, in those aggitated and confused moments, they were unsure how to react, whether to try to go back and save those who were drowning or whether to continue their desperate journey onward. Then the silence descended. Everyone, however, continued to believe that they would soon see the ship waiting for them to complete the crossing. The darkness of the night became more and more dense and their hopes began to falter. The satellite phone credit ran out and the inexperience of the driver, a migrant trained just a few days before departure without any experience of sailing, loses direction, exhausting the fuel available. The hours passed and, at the mercy of the waves, there were those who fainted and those who wept, those who prayed and those who were sure their lives would end wished for it to happen as quickly as possible.

Afana’s only desire on that dinghy was to continue living , as his life hung by a thread. When, after many hours, he saw the MOAS ship approaching, it was a moment of liberation, a light, a chance.

The tears of emotion at his graduation remind us how impossible it was for him to imagine, in those moments, a life and a redemption like the one obtained today. And he tells us:

“After being a migrant in the Mediterranean you are a new person, it is like you are born again and you need to feel treated with the sweetness with which you would treat a child. Every rescued person is a child born. We need someone to help us take care of our lives. When you get here you no longer have any plans, you no longer know who you are and what you will do, you can’t do anything anymore, you just know how to survive,you’re alone and you have no one. If someone doesn’t take you by the hand and doesn’t explain to you every little thing you can’t do it.”

Even then, on arrival in Europe, people are faced with the impossibility of a normal life and the confusion and exhaustion of administrative procedures in the centers, of empty days without anyone by their side, just waiting.

After three months in a CAS in Tuscany Afana was transferred to the SPRAR of Cerignola in Puglia.. Here, the inclusion in an ecclesiastical community that takes him by the hand, signaled the beginning, step by step, of a new life.

Suor Paola becomes like a mother, she bought his first jacket and would encourage him to continue his studies. In May 2015, Afana is recognised with refugee status and obtained a scholarship that would allow him to graduate. Today he is engaged in the Civil Service at the Università di Bari, where he is actively engaged in the protection of human rights.

That is why today we ask that the tragedy in the Mediterranean may end through the implementation of Safe and Legal Routes, such as family reunification, sponsorship, work and study visas facilitation, humanitarian corridors and many other tools that exist, but are rarely used, to allow the most vulnerable people to safely reach the destination countries, avoiding suffering and loss of life.

You can help us signing our appeal: www.moas.eu/safeandlegalroutes