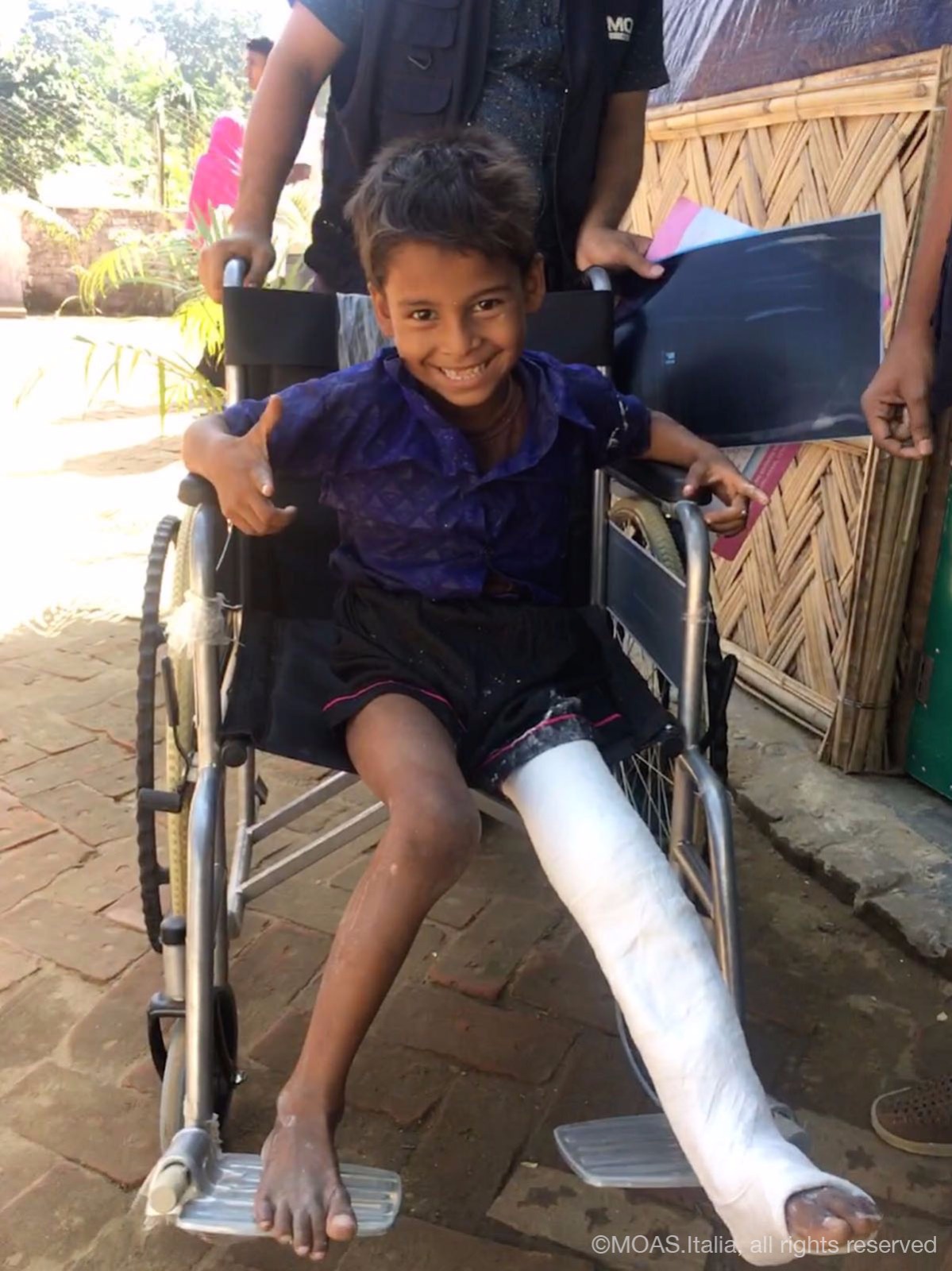 On August 25th 2017, violence erupted in Myanmar with escalating clashes between the stateless Muslim minority called Rohingya and the local army. Two days later, Pope Francis openly called on the international community to take immediate action to prevent massive human rights violations, and to pray for our Rohingya brothers and sisters. The Rohingya population in Myanmar has faced a long history of injustice, segregation and discrimination. They mainly live in Rakhine State, where they have endured dire conditions caused by the dramatic limitations coming from their legal status. Being stateless means being denied all civil and political rights related to citizenship, including access to education and healthcare systems. Rohingya people were also prevented from working in public administration, and have survived through fishing activities and other work.

Nevertheless, the situation has dramatically worsened since August, and an exodus is currently taking place from Myanmar into Bangladesh, a lower-middle income country which is doing its best to welcome these persecuted people. According to UNHCR, an estimated 624,000 Rohingya people have arrived in Bangladesh so far, among them 236,000 in settlements different from Balukhali and Kutupalong and 46,000 in host communities. Latest figures from the Inter Sector Coordination Group focused on the number of arrivals and compared them to the local situation before the influx; the numbers depict an appalling situation. Pre- August 2017 there were an estimated 8,433 Rohingya people in the makeshift camps around Shamlapur. Between August and November 28th 18,354 people arrived, resulting in the current total population of almost 27,000 people in a settlement where 16 individuals might be sharing one single (full or dangerous) latrine, according to the Dhaka Tribune . The Sphere Handbook on this topic clearly states that “A maximum of 20 people should use each toilet” and defines standards for building and arranging sanitation facilities. At present, most of the refugee camps do not comply with these standards, as in Leda up to 47 people use the same latrine, while in Unchiprang up to 57 people must share.

As highlighted by different relief organizations working on the ground, access to clean water, sanitation facilities and hygiene is crucial, as is medical assistance and humanitarian aid both for the Rohingya people fleeing violence and persecution and the local host communities whose limited resources are currently at a tipping point. Between August 25th and November 11th, at least 36,000 cases of Acute Watery Diarrhea have been documented, while many other cases may go unreported since most attention has been focused on the Kutupalong and Balukhali expansion sites –where 342,000 new arrivals have been registered – while smaller villages in remote areas in southern districts risk being excluded from humanitarian aid distribution. 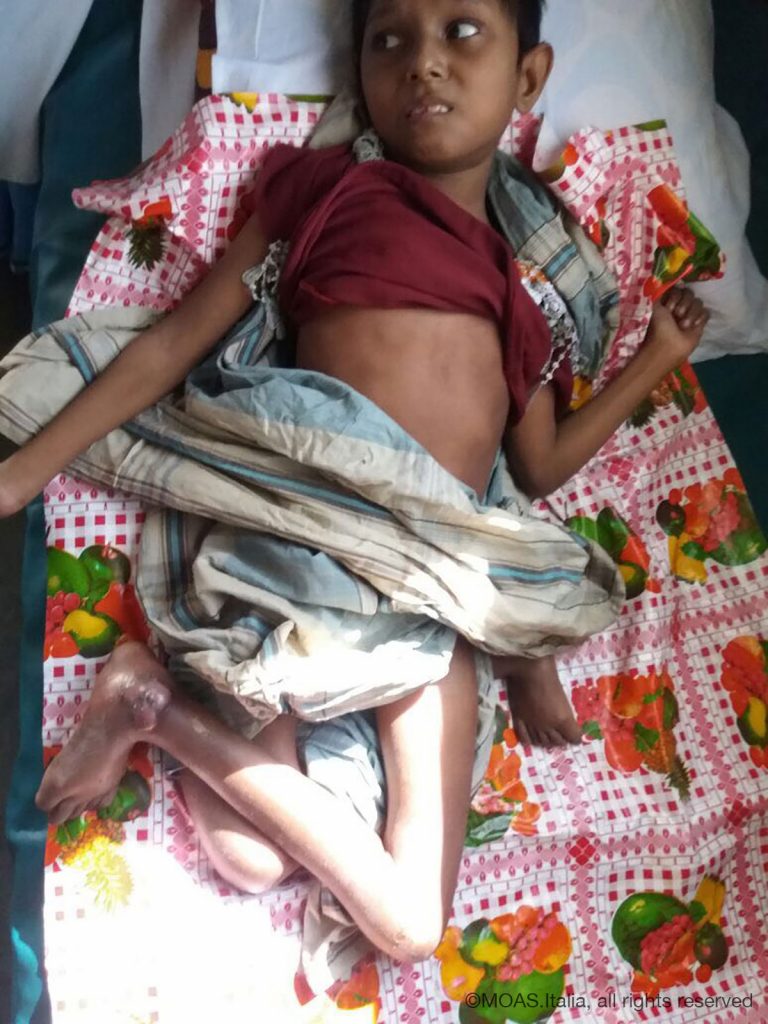 This is why MOAS has decided to deploy our efforts and assets in South-East Asia, where we are running a medical and humanitarian relief mission to bring hope, care and assistance both to the Rohingya and the Bangladeshi population, who are sharing land and resources with their persecuted brothers and sisters. Additionally, we decided to establish our first Aid Stations in areas less served by humanitarian agencies, such as Shamlapur and Unchiprang. Shamlapur is a fishing village near to Cox’s Bazar that sheltered almost 8,500 Rohingya people before the recent influx which has led to more than 18,000 new arrivals. On October 14th we launched our very first Aid Station, providing sorely-needed medical assistance. In less than one month, the MOAS medical team, supported by cultural mediators, managed to treat 5,717 people: 1,969 babies and children under the age of 11; 314 teenagers between 12 and 18; and 3,434 adults aged over 18.

As the Rohingya camp population is mainly comprised of women (54%) and children (52%), it is vital to provide pediatric, ante- and post-natal care, as well as to support pregnant women and new mothers. Many of the people we treat have never seen a doctor in their lives, while the MOAS staff on the ground also plays a significant role in spreading awareness about communicable or water-borne pathologies, which is key to avoiding the outbreak of diseases such as cholera. More than 3,800 women and girls have been treated during Shamlapur Aid Station’s first operational month, while the number of Bangladeshi patients was even greater than Rohingya patients. This provides significant evidence that our Aid Stations are there to help and support whoever is in need; the best therapy we can offer is love and care, beyond the free medicines at our pharmacy and expert treatment from our doctors and nurses.

The most common diseases treated so far concern fevers, colds, diarrhea, skin infections or pneumonia, while the team provides regular assistance to pregnant women. Some emergency cases are linked to accidents in the camp or its surroundings, and on Sunday 12th the MOAS team in Shamlapur was blessed by the very first delivery on one of our Aid Stations. The baby was born to a young Rohingya couple born in Bangladesh to refugee parents and excited to introduce the new baby to their family and community. For us, it was the best evidence of the robust preparation work arranged over the last months.

Our hope is to continue to assist those in need through our MOAS Aid Stations, and to open new centres to reach as many patients as possible. Moreover, I wish that the visit of Pope Francis in Myanmar will help to raise awareness and to shine a light on the plight of this persecuted minority, pushing the international community to react with a consistent plan to support Bangladesh in its unprecedented effort to welcome the Rohingya people.

Peace in this region can only be achieved by walking along a shared path of mutual comprehension, respecting the interest of all parties involved, and with the ultimate goal to safeguard basic human rights.