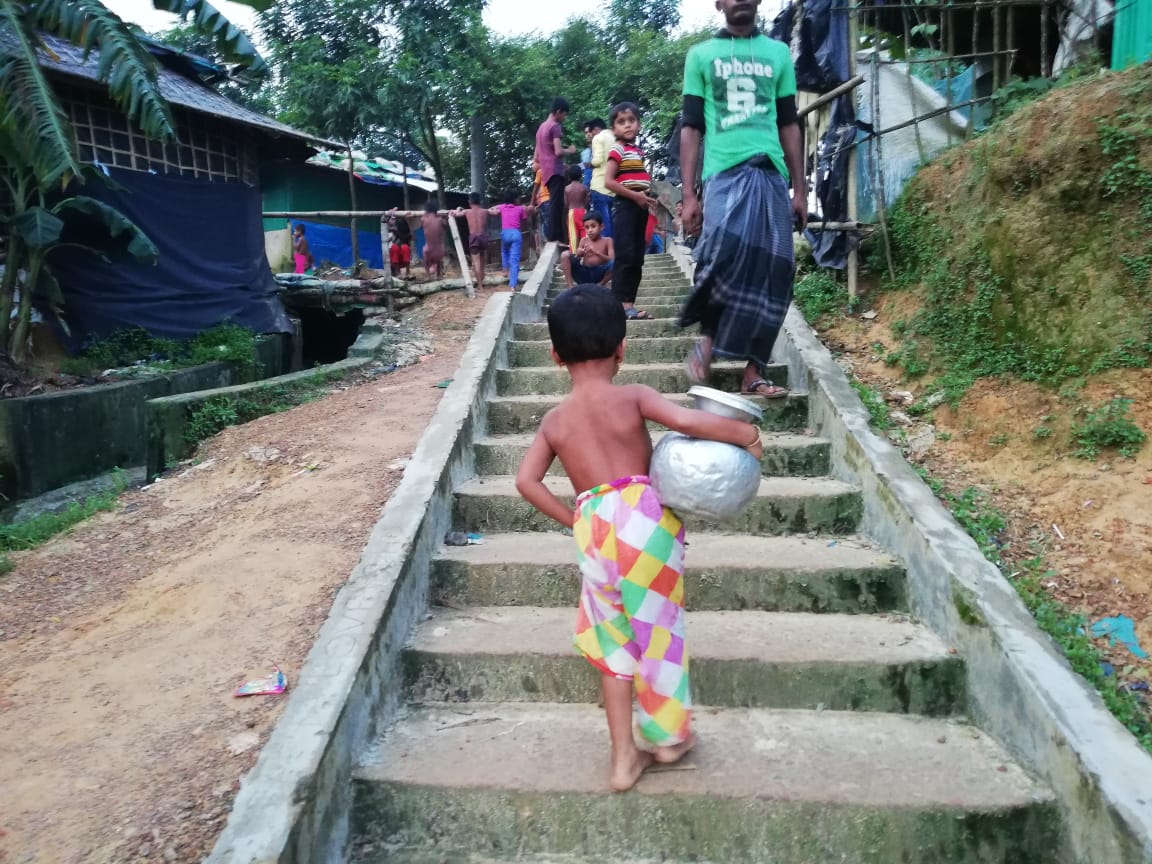 Anwara precariously walks on some slippery steps with a big water pitcher in her hands. Her small profile almost disappears amid the chaos inside Bangladeshi Rohingya camps, where people are always busy. Some people go to collect water, some take care of food rations, some others rush to grab sandbags to stabilise their shelters or try to fix the damage caused by adverse weather. She doesn’t have shoes, but at least she has colorful trousers and is luckier than most of the kids here who go around completely naked.

Water collection is just one of the many activities carried out by children and adolescents who need to support their families on a daily basis, to the detriment of their childhood and mindfulness. Thousands of them will never know the genuine happiness and joy of childhood and adolescence. Traumatised and limited by their extremely precarious living conditions, they focus all energies on surviving. Overwhelmed by daily tasks, they become adults too early.

Other kids help a woman to pile sandbags to protect her shelter from torrential rains causing landslides and floods which affected almost 10,000 people only between July 25th-31st. Monsoon rains have recently triggered a real emergency, and even the kind of normal daily routine developed over the previous months is washed away in Cox’s Bazar region, Bangladesh. According to the latest ISCG Monsoon Emergency Update, “103 learning facilities have been affected by landslides and 58 by floods (…)Closure of the learning facilities has affected an estimated 16,500 children who have been reassigned to other facilities”. Furthermore, many shelters were destroyed, at least 4,000 people became forcibly displaced, and health facilities were incapable of treating all emergency cases, both because some had to suspend the provision of services and the health sector is one of the less funded. This is why MOAS established a first-aid area close to a bridge near Shamlapur refugee camp to facilitate people in need of medical assistance and overcome mobility problems. 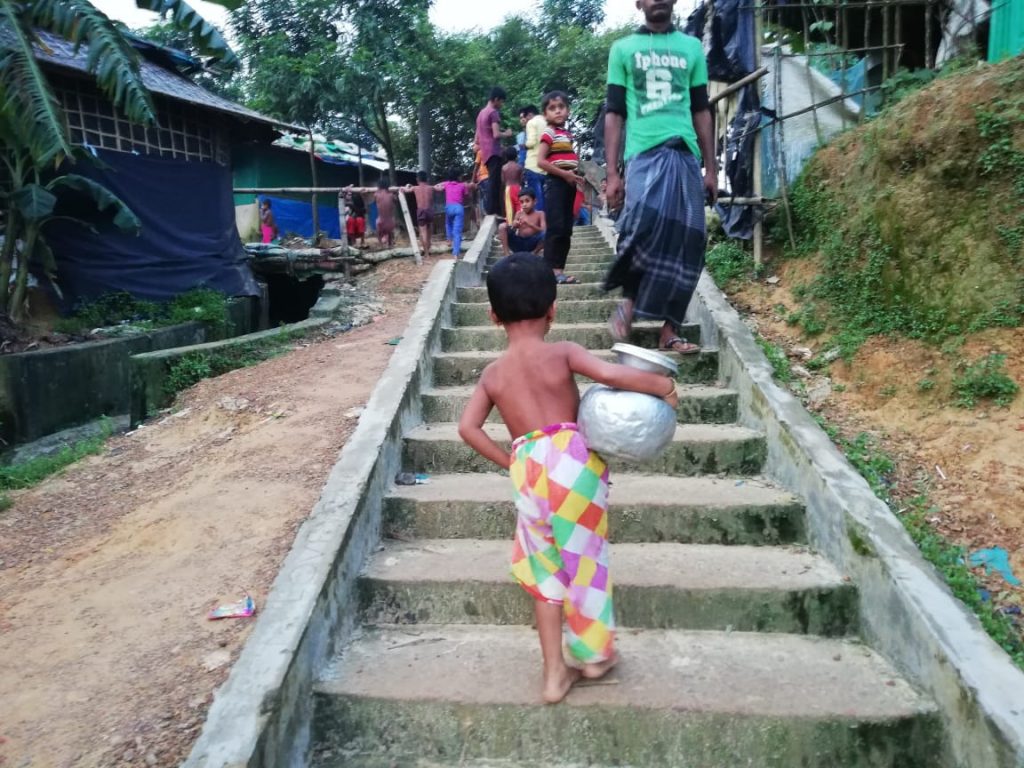 Beside the lack of education and difficulties receiving healthcare assistance, persecuted Rohingyas are negatively affected by two further tragedies: human trafficking and forced labour. I have often addressed this topic to raise awareness of these horrific calamities that go hand in hand with global forced migration. When I listen to those living in Bangladeshi camps, I remember the stories told by those we rescued at sea. Desperation, a lack of prospects, conflicts, persecution and extreme poverty create fertile ground for abuse in every place. Since the very beginning of the Rohingya exodus, concerns about the risks of human trafficking, forced or sexual work and slavery were raised and later confirmed. For sure, appalling living conditions in makeshift settlements and registered camps also play a role in light of overcrowding and lack of resources that further complicate even the easiest of daily activities.

Data released by the International Labour Organisation (ILO) explain that in 2016 40 million people were victims of contemporary forms of slavery at the global level, while forced labour affected 152 million children aged between 5 and 17. An estimated 29 million women and girls might be involved in modern slavery. If sexual exploitation or forced marriage are taken into account, women’s percentage dramatically raises to 99% and 84%. Additionally, if we focus on the geographic dimension, Asia-Pacific is the region with the highest rate of all forms of modern slavery (62%) from sexual exploitation to forced labour for national authorities and forced marriage.

It is enough to talk to the inhabitants of Rohingya camps in Bangladesh to better understand the situation. In every family, girls and female children are easy prey of unscrupulous traffickers, and their mothers see their personal safety as the highest priority, especially if they are alone in taking care of their household.

Building from ILO data, a recent report by Save the Children focuses on the situation in Italy and highlights some phenomena like sexual exploitation of Nigerian girls, living conditions of Romanian women and extortions experienced by migrants who try to cross Italian borders with France. Last year, I wrote about the alarming percentage (80%) of Nigerian girls who are trapped in prostitution upon disembarkation, and I often talk about sexual exploitation to raise awareness. Nonetheless, beside geographical regions and forms of slavery, the real problem is to understand that these phenomena can occur because there is no alternative. Criminal networks always take advantage of the gaps left by political authorities and international organisations. If you are so desperate to flee the country where you are living at all costs, you’ll do it in the hands of traffickers who will exploit and enslave you, unless will find a save and legal pathway.

We urgently have to work on alternative solutions, since the general situation is deteriorating, both in terms of people forced to flee and in light of expanding slavery and forced labour. We -political institutions, civil society and international organisations- have to cooperate to eradicate these abominable phenomena and restore the human dimension of the ongoing crises before generations of children and adolescents will be trapped in the cage of forced labour and slavery, being denied the right to enjoy a free and happy childhood.